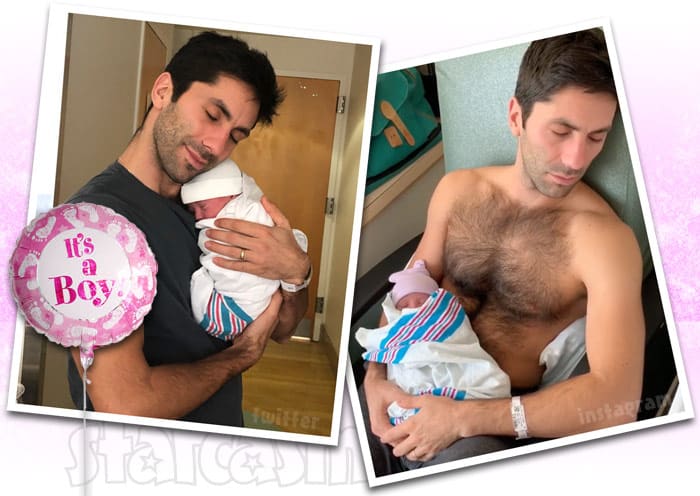 Congratulations to Catfish host Nev Schulman and his wife Laura Perlongo as they have just welcomed their second child, son Beau Bobby Bruce!

Nev broke the news on social media with video clips holding his newborn son. “Beau Bobby Bruce has arrived! A little perfect ray of son-shine,” Nev wrote. He revealed that bouncing baby boy Beau Bobby Bruce tipped the scales at 7lbs, 15oz before revealing that the newest little Schulman and mom were doing great. “Beau & Laura are all giggles and snuggles and we couldn’t be happier,” Nev added, along with this colorful string of emoji: ??‍?‍?‍??✨

Here is the video of Nev with his newborn son:

Laura also posted a brief video and a photo of Beau, which she captioned by writing: “BEAU BOBBY BRUCE ? 1/9/19 Smitten. ❤️”

Nev and Laura humorously teased Beau’s arrival with a clip promoting the new episode of Catfish Wednesday night. In the brief video, we see Laura’s pregnant belly in the delivery room from her perspective, with a sheet covering her legs.

We are then surprised to see that Laura has been catfished as her bundle of joy turns out to be Nev. “Oh, it’s coming!” Nev says, smiling ear-to-ear. “New episode of Catfish, tonight at 9/8c baby!” Laura can be heard laughing as Nev goes back on baby watch.

Pop-to-be Nev was in the middle of a public appearance to talk about dating in the digital age at Apple’s Soho store in New York City on Wednesday when he got the message that Laura was in labor. He was only 15 minutes into the appearance when the announcement was made to the crowd and he rushed off stage to meet Laura at the hospital. His departure was met with cheers from the crowd, according to Page Six.

Little Beau, whose name has more Bs than a honey farm, joins 2-year-old sister Cleo James, who was born on October 21, 2016.

CONGRATULATIONS to Nev and Laura! These two are one of my favorite celebrity couples ever, and I can’t imagine a more supporting, loving, and hilarious environment to grow up in!

* Yes, the “It’s a Boy!” balloon being pink was intentional. It was a nod to Nev and Laura’s outspoken views on gender stereotyping.