My son my love until I will live @jimmymbennett marina del rey 05.2013

The terrifying tale of the #MeToo continues to twist with new revelations unearthed by the New York Times that one of the movement’s most prominent victims of Harvey Weinstein paid $380,000 to silence her own sexual assault victim. The assault took place in 2013 when she was 37 and he was 17, but the context of the situation makes their relationship and encounter even more abusive.

Child actor Jimmy Bennett first met Asia Argento when he was seven-years-old to play her son in a gritty movie called The Heart is Deceitful Above All Things. Argento directed and cowrote the film, which is based on what was supposed to be a memoir by a person named J.T. Leroy.

Leroy was supposed to be a teenage boy who poured out the story of his unimaginably rough past to much literary exclaim, but he didn’t actually exist. He was a persona invented by a woman named Laura Albert. At the time Argento made the film she was still under the impression that the shocking and sad scenarios she was depicting in the film were based on a real story.

Bennett’s character is Jeremiah, a young J.t. Leroy, and the movie depicts him being taken from his foster home by his drug-addicted, unhinged mother (Asia Argento.) As she moves from place-to-place, and boyfriend-to-boyfriend, Jeremiah is sexually abused by her boyfriends. One of her last boyfriends in the film is played by Marilyn Manson, and in a particularly disturbing scene the boy dresses up like Marilyn Monroe and “seduces” Manson’s character. While Manson’s character rapes the boy he envisions Asia Argento’s character.

Here’s the trailer for the movie. The full film can also be currently found on YouTube.

The title of the movie, and it’s subject matter, are almost too poignant considering the depth of abuse going on by everyone from Weinstein to Argento. Victims can be abusers too.

After filming wrapped Argento lost touch with Bennett since she mostly lives in Rome, Italy, but her social media shows she remained attached to him. In the year before their sexual encounter in a hotel room, Argento tweeted out a long sentimental tangent to Bennett. She ends with “sucks I left LA. I would have followed you everywhere.” 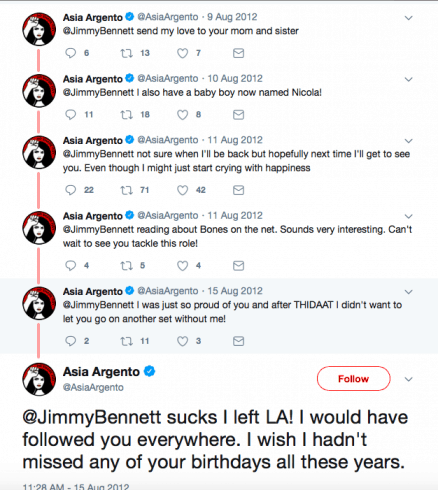 Just half a year later she would meet up with Bennett again during a trip to L.A. The then 17-year-old Bennett could not drive because of an eye condition, so he had a relative drive him to meet up with Argento at her hotel. According the the NYT report, she gave him alcohol, showed him letters she’d written to him, took off his pants, gave him oral sex, and then had intercourse with him.

Here’s a chilling selfie she posted on Instagram as as she awaited Bennett’s arrival to her hotel room that day. “Waiting for my long lost son, my love @jimmymbennett” she writes. “With trepidation #marinadelrey smoking cigarettes like there was no next week.” 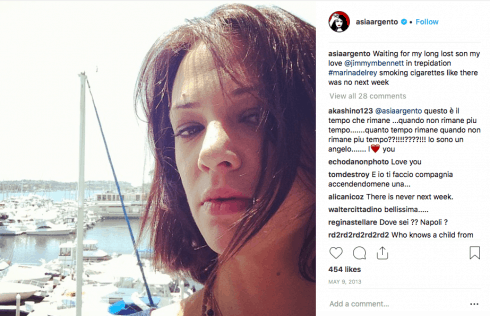 Happiest day of my life reunion with @jimmymbennett xox

Recently the now 22-year-old Bennett sued Argento over her sexual encounter with him when he was underage. He originally asked for $3.4 million in damages, citing trauma and an inability to earn as much had he was earning as an actor before the assault. He had been working in movies like Evan Almighty before the incident. A settlement was reached this April, and according to The New York Times, Argento’s boyfriend, the late Anthony Bourdain, was reportedly helping her “navigate” this issue.

The settlement included a $380,000 payout but did not include a non-disclosure agreement. The Times say they received the information about the suit in the form of an “encrypted email by an unidentified party.” Part of the documents were a selfie of the two of him in bed on May 9, 2013.

Bennett’s lawyer Gordon K. Sattro told The Times, “Jimmy will continue doing what he has been doing over the past months and years, focusing on his music.”