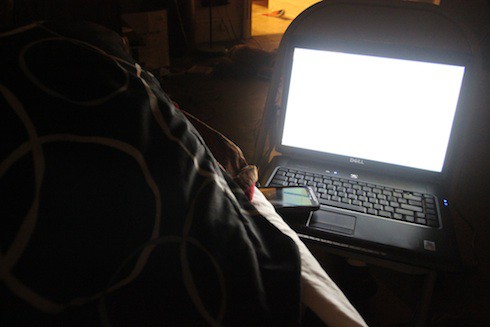 If you spend more time staring into screens than basking in the sun’s glow, you might be in danger of long-term health risks. That’s the conclusion a group of researchers from the University of Connecticut have arrived at, in a new study published in Philosophical Transactions of the Royal Society B. (It is a British journal.)

According to Richard Stevens, a cancer epidemiologist at the University’s Health Center, any electronic device with a light-emitting screen can disrupt the brain’s production of melatonin, which is crucial for getting humans to sleep. The disruption is particularly bad when we use devices at night, and gets worse the closer to the screen we are–watching TV from across the room isn’t as disruptive as staring at a computer monitor, and neither is as bad as using a tablet or smartphone.

When melatonin disruption occurs, the body has a harder time getting to sleep, and its natural circadian rhythms are thrown off. Since circadian rhythms follow the natural cycle of daytime sunshine and nighttime darkness, any disturbance in that particular force will scatter your sleep cycle, confuse the release of other hormones, and even mess with your body’s temperature.

And the long-term detriment of those disruptions can be shocking. Said Stevens, “There’s growing evidence that [connects] this…to breast cancer, obesity, diabetes, and depression, and possibly other cancers.”

So: How can you fight back without getting rid of your handy gadgets? For starters, trade an e-reader for a good, old-fashioned paperback. If you’re used to reading before bed–or while in bed–a physical book will help ease you into sleep, where screens can have the opposite effect.

Another thing to do is get outside as much as possible during the day. The cumulative effect of staring into a bevy of screens is exacerbated by a lack of natural light. And, in addition to turning all your devices off before sleep, you might consider some blackout curtains. Stevens’ research shows that darkness at night is as important as sleep: “The point of emphasis to all this is that while sleep is deeply important to well-being, so too is exposure at night to dark. The importance of sleep has finally entered mainstream thinking and practice; however, the importance of dark is still greatly underappreciated.”

Do you sleep with your phone or tablet nearby? How much light do you let into your bedroom–and how well do you sleep?