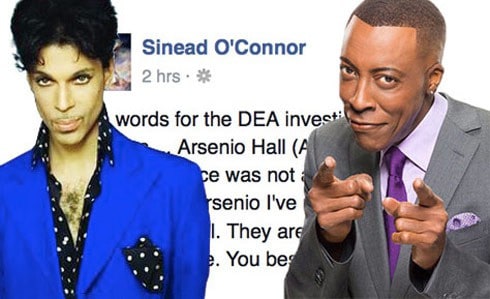 The internet was reminded a couple  of days ago that nothing compares to the wild stuff Sinead O’Connor will say. In a recent Facebook post, the Irish singer accused 90’s talk show host Arsenio Hall of supplying Prince with drugs. Now Hall has fired back with a multi-million dollar lawsuit.

Hall has filed a $5 million lawsuit for defamation of character in response to O’Connor’s rant in which she called Hall “Eddie Murphy and Prince’s bi**h.” She also claimed that she was so convinced of Hall’s guilt that she reported him to the authorities.

The complaint reads in part, “O’Connor is now known perhaps as much for her bizarre, unhinged internet rants as for her music. This time, she targeted Hall with wild and false accusations that he had been Prince’s drug supplier for decades and had somehow been responsible for Prince’s death. However, O’Connor knew that there was no truth whatsoever to the vicious lies she spewed about Hall on her Facebook page .”

Hall also denied spiking Sinead with drugs many, many years as she also claimed. He added that Sinead’s motivations are fueled by an acrimonious relationship she had with Prince, who penned her biggest hit, “Nothing Compares 2 U.”

A hearing is set for August 23 in court to see if this could move forward to a jury trial.

Sinead O’Connor found after being ‘missing suicidal’ in Chicago