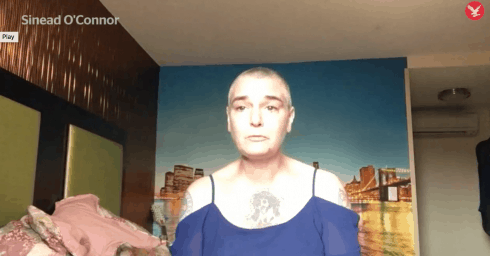 50-year-old singer Sinead O’Connor sparked fears about her safety after she posted an emotional video on her Facebook page. In the video, which has racked up almost a million views, a tearful O’Connor said that she suffered from three mental illnesses and has been abandoned because of her struggles. She said she was making the video for the “millions of millions of millions of people who are just like me actually who don’t have necessarily the resources that I have in my heart or my purse for that matter.”

She said she was recording in a Travelodge in New Jersey and the video sparked concern bout her safety because she in open about having had suicidal thoughts for the past two years. An update on her Facebook page assures the public that she’s now “safe,” and “not suicidal.”

“Why are we alone? People who suffer from mental illness are the most vulnerable people on Earth,” O’Connor said. “You’ve got to take care of us. We’re not like everybody.”

“I just want to make this video so you all could see what the f— it’s like,” she explained. “It’s the stigma that’s killing people, not the mental f—- illnesses.”

VIDEO: Rick Springfield discusses his own suicide attempt on GMA

Elle King opens up about experiencing depression and PTSD: ‘It’s like a trip on LSD’