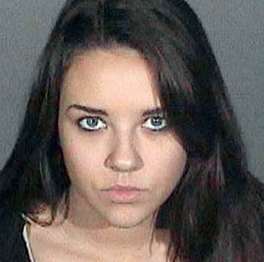 Alexis Neiers, the young E! starlet who got mixed up in the Hollywood’s Bling Ring robbery gang, was released from the Lynwood jail yesterday after serving one month of her six month sentence.

She was in a cell next to everyone’s favorite fallen starlet, Lindsay Lohan, who entered earlier this week for a 2007 DUI and, ironically, was one of the Bling Ring’s victims. But to spare things getting a little too ironic, Alexis Neiers was not involved in the Lindsay Lohan break-in, she was only present when the group plundered Orlando Bloom’s house. Her defense was that she was so drunk she threw up in Orlando’s bushes.

Upon release she told TMZ that she’s very “humbled,” and “blessed,” and that she is “very grateful for my family right now.” Her plans are to take a shower, get in bed, eat a good meal, and relax with her family.

She also released this statement:

“I’ve had time to reflect on my life and the choices that led me to  this experience, left alone in my cell 23 hours a day and having  everything stripped away but the bare essentials. I did a lot of  soul searching. I feel very humbled and see my life in a way that I  have come to be very grateful for.”

No word yet if E! is planning a second season for her reality show Pretty Wild, which featured her, her mother Andrea Arlington Neiers, her “sister” Tess Taylor, and her other sister Gabby Neiers as they navigated the road to Fame in Los Angles. Alexis’ arrest and court case was a major dramatic plot for the first season.