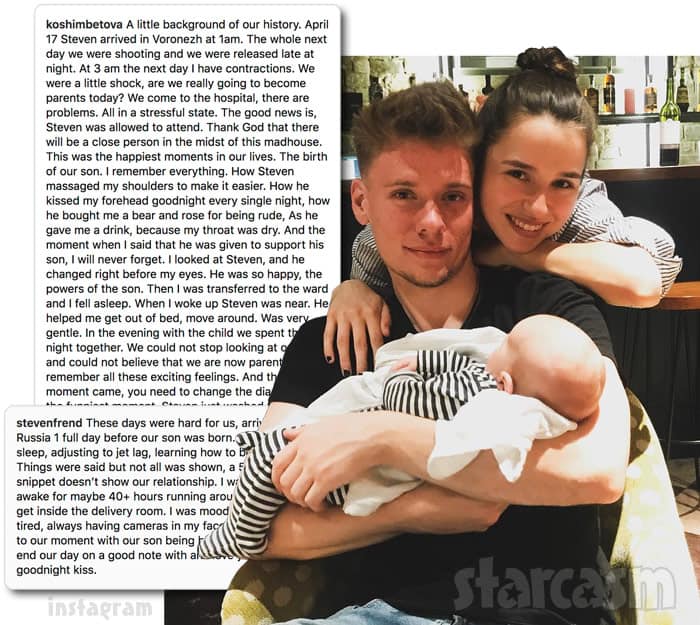 On Sunday night’s episode of 90 Day Fiance, fans got to see the cesarean birth of Steven and Olga’s son Richie in a Russian hospital — a scene that merited a graphic warning from TLC as the network decided to show the procedure unedited. On the day that Olga is scheduled to be released, Steven begins to get very irritable and impatient. The result was some harsh words and heated exchanges between the two. Steven’s apparent lack of patience and his very aggressive manner — especially given that Olga was still recovering — alienated a number of viewers and sparked a lot of negativity on social media.

Both Olga and Steven took to social media after the episode aired to defend him by explaining — yet again — that viewers don’t get the whole picture, and instead only see the edited product that serves the story that the producers want to tell. “Things were said but not all was shown,” Steven wrote on Instagram. “A 5 minute snippet doesn’t show our relationship.”

The 21-year-old dad continued by pointing out that he arrived just one full day before Richie was born. “These days were hard for us,” he said. “I was actually awake for maybe 40+ hours running around fighting to get inside the delivery room. I was moody from being tired, always having cameras in my face with no privacy to our moment with our son being born.”

Despite all of the craziness, and even the heated moments after Richie’s birth, Steven said that the two always managed to end things on a positive note. “We always end our day on a good note with an I love you and a goodnight kiss.”

Olga had even more to say about the scenes we saw, and what viewers didn’t get to see, in a lengthy post praising Steven for being so supportive throughout the birth and her recovery:

A little background of our history. April 17 Steven arrived in Voronezh at 1am. The whole next day we were shooting and we were released late at night. At 3 am the next day I have contractions. We were a little shock, are we really going to become parents today? We come to the hospital, there are problems. All in a stressful state. The good news is, Steven was allowed to attend. Thank God that there will be a close person in the midst of this madhouse. 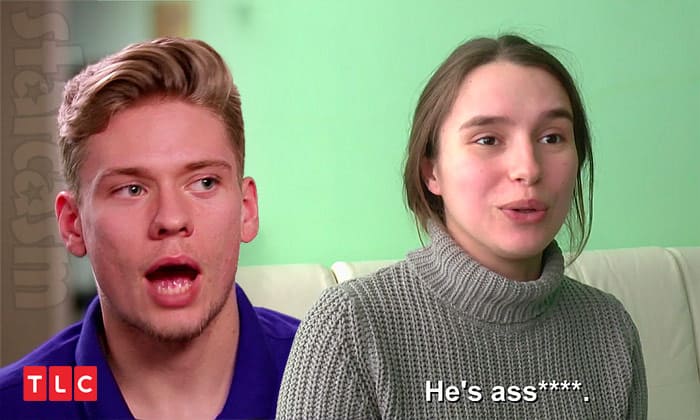 This was the happiest moments in our lives. The birth of our son. I remember everything. How Steven massaged my shoulders to make it easier. How he kissed my forehead goodnight every single night, how he bought me a bear and rose for being rude, As he gave me a drink, because my throat was dry. And the moment when I said that he was given to support his son, I will never forget. I looked at Steven, and he changed right before my eyes. He was so happy, the powers of the son.

Then I was transferred to the ward and I fell asleep. When I woke up Steven was near. He helped me get out of bed, move around. Was very gentle. In the evening with the child we spent the night together. We could not stop looking at our baby and could not believe that we are now parents. I remember all these exciting feelings.

And then this moment came, you need to change the diaper! It was the funniest moment. Steven just washed the baby, just wanted to put on a new diaper as the baby pooped again and pee’d on the entire table?

To all fans, you see 5 minutes of our life. You do not know who we are as a person. Don’t be so quick to judge but we understand you only see, what you see.

In case you were curious, and the posts above weren’t enough of a clue, it does appear as though Steven and Olga are still together. Steven recently made a return trip to Russia to be with his family, but was back in the United States in time for the 90 Day Fiance Reunion taping this weekend.

I really like Steven and Olga — they seem genuine and sincerely focused on trying to make their relationship work while providing a loving and supportive environment for their son. To be honest, the two of them remind me more of an episode of 16 and Pregnant, but one of the rare episodes where the dad really steps up.

A belated congratulations to the both of them on the birth of their son! Here’s a photo of dad and his little boy followed by Steven’s caption:

On the 19th of April, 2018 Richie Aleksandr Frend was born at 11:55am, words will never be able to describe how quickly your world changes for the better. I’ll always protect you Alex and your mother. ❤️

Be sure to keep up with Steven and Olga and the rest of the 90 Day Fiance Season 6 couples with new episodes airing Sunday nights at 8/7c on TLC!