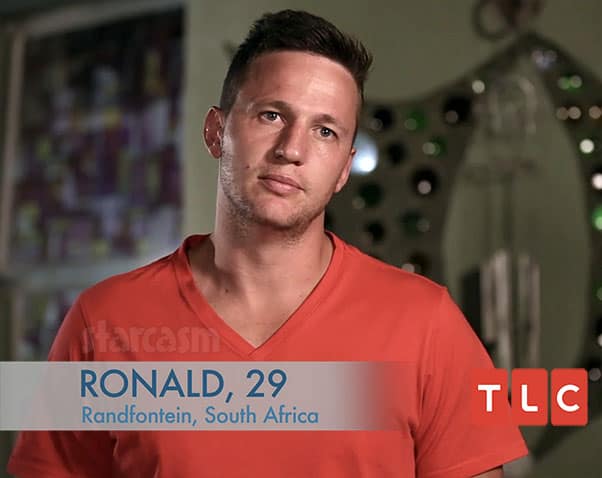 On this week’s episode of 90 Day Fiance: Happily Ever After, Tiffany Franco Smith meets up with her dad Carlos in hopes of convincing him to co-sponsor her husband Ronald’s CR-1 visa. Asking your dad to be financially responsible for your immigrant husband for ten years is already a huge ask, but Tiffany’s chances of getting a “yes” are diminished by another factor: she hasn’t told her dad ANYTHING about Ronald’s gambling addiction or his extensive criminal record.

“I’m really struggling to find the words to tell my dad all about the not so good things about Ronald because he met Ronald when we were at our best, when we were just happy,” Tiffany explains to the TLC cameras. “It was our wedding. And now if I tell him all these [BLEEP] truths about Ronald, will he look at Ronald, like, ‘I don’t support this marriage. I don’t want them to be together. I don’t want him to look at my husband like he’s a piece of sh*t.”

Tiffany meets her dad for lunch, and she spills the beans about Ronald. Actually, she only spilled a couple of the beans. “Ronald has had — he had a problem with gambling for a while. He’s got it under control now, but that was a problem for him.” Carlos remains silent as he continues to listen to Tiffany.

“And not only that, but way before I met him, Ronald does have a little bit of a record,” Tiffany adds.

“What kind of a record?” Carlos asks. (Perhaps he thought Ronald was like other African 90 Day Fiance fellas and had a musical record out?)

Carlos is feeling some doubts about Ronald, but Tiffany remains steadfast in support of her husband. “Everything that’s on his record is withdrawn, meaning he was never convicted of anything,” she assures her dad.

Carlos eventually agrees to be Ronald’s co-sponsor. However, judging by what viewers have seen on the show, there is still A LOT that Tiffany didn’t reveal about Ronald’s criminal past!

#90DayFiance #TheOtherWay Tiffany reveals she and Ronald have split with a respectful announcement. Ronald responds, and that sparks a back-and-forth that is a little bit less respectful. Get a full recap (so far)! https://t.co/iNnlQOsFw8

Given that Ronald is from South Africa, it is very difficult to track down his actual criminal record via the courts there. However, we have a vast history of information being shared by both Tiffany and Ronald over the course of their numerous episodes of 90 Day Fiance: The Other Way and 90 Day Fiance: Happily Ever After.

When viewers first met Ronald Smith on 90 Day Fiance: The Other Way, he talked about how the need for money to feed his gambling addiction led him down a criminal path. “I would steal stuff by my house. I’d go and pawn my mother’s stuff,” he confessed. “My mother used to go on vacation and come back, and her whole house is empty. And that was due to me. I got locked up for drinking and driving. I got locked up for speeding. And, um, you know, my mom locked me up for burglary.”

In a later episode, Ronald revealed that he also pawned his mother’s fridge and a car that was in her name.

Viewers got more information about Ronald’s run-ins with the law when Tiffany visited an attorney for an on-camera consultation for Ronald’s potential K-1 visa application. The lawyer was quite shocked when Tiffany revealed that Ronald had a criminal record. When asked for details, Tiffany said that Ronald was charged with armed robbery, possession of a drug (Tiffany didn’t know what drug), and “stolen money.”

“The armed robbery was proven that it wasn’t him,” Tiffany assured the lawyer.

He asked Tiffany for clarification on the “stolen money” charge. “I guess I don’t know a lot about that one,” she admitted. “I haven’t really gotten into a discussion with him about that charge. I didn’t ask a lot of questions. I probably should.”

To summarize, here are all of the criminal charges that Ronald has been arrested for, according to what has been revealed on the show:

• Speeding (Ronald says he got “locked up for speeding,” so I assume this was more than just a speeding ticket?)

As far as Ronald’s gambling addiction, he attended a Christian-based rehabilitation and wellness center for 6 months. He was released the day that Tiffany and Daniel arrived in South Africa for the wedding.

To keep up with the rest of Tiffany and Ronald’s relationship, be sure to tune in to new episodes of 90 Day Fiance: Happily Ever After airing Sunday nights at 8/7c on TLC.

You can also catch up on #Tiffonald via the discovery+ streaming service. Not only do they have all of Tiffany and Ronald’s episodes of The Other Way and Happily Ever After, they’ve also isolated all of the couple’s footage as part of their 90 Day Journey series. (Watching 90 Day Journey: Tiffany and Ronald certainly made putting this post together a lot easier!)