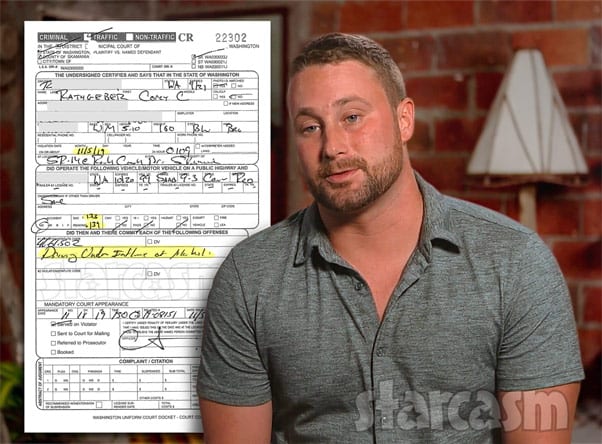 90 Day Fiance: The Other Way star Laura Jallali doesn’t have the best of reputations when it comes to telling the truth, but it turns out that at least one thing she revealed last week during a tipsy Instagram live session lashing out at a few of her co-stars was true: Corey Rathgeber was recently charged with a DUI.

Online records reveal that there was a case filed against Corey in Washington on November 7 of 2019, though there is no more information available via the state’s court website. We did a little more digging and can exclusively confirm that the case is in reference to Corey being stopped for driving under the influence.

According to the citation, Corey was driving his Saab on Lewis and Clark Highway in Skamania County, Washington at roughly 1AM on Tuesday morning, November 5. The citation also indicates that Corey’s blood alcohol level was above .13, which clearly exceeds the state limit of .08.

Thankfully, there was no accident. The citation also indicates that there was no passenger in the vehicle at the time.

Of slight interest to some viewers is the fact that the Corey is listed as the owner of the Saab that he was driving. 90 Day Fiance: The Other Way fans will recall that Corey was forced to sell his car before moving to Ecuador to be with Evelin.

Corey was reportedly back in the United states for a number of months this fall before being able to return to Ecuador, so perhaps he purchased a vehicle during that time?

Corey’s case has two upcoming court dates listed, one on February 3, and another on June 15. It’s unclear if he will need to return to the Unites States for either or both of those hearings.

Prior to his DUI, Corey was charged with furnishing alcohol to a minor back in 2015. According to that citation, the alleged incident went down at the Skamania Lodge on July 10.

Getting back to Laura, Corey recently posted a video addressed to her on Instagram in which he threatened Laura with legal action if she didn’t stop talking about him and Evelin. Here’s a clip from his video:

TLC has reportedly been filming Corey and Evelin in Ecuador, but it’s unclear in what capacity. If they are not returning for The Other Way Season 2, viewers can expect to catch up with them on 90 Day Fiance: What Now?

90 Day Fiance: The Other Way Details on Biniyam’s 1st marriage and child with an American woman