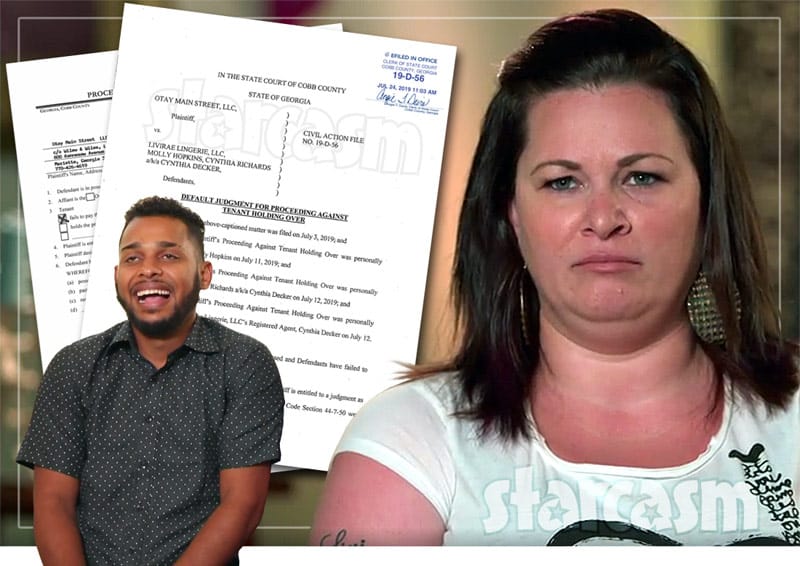 90 Day Fiance: Happily Ever After star Molly Hopkins is involved in yet another acrimonious break up, this time with her lingerie business’s former landlord! According to court documents, a default judgment was issued against Molly’s LiviRae Lingerie earlier this year for an amount in excess of $30,000 after the business allegedly continued to occupy a rental property after the lease expired.

LiviRae Lingerie announced on July 7 that it was their last day at their Ernest W. Barrett Parkway location in Kennesaw, Georgia as they prepared to move to a new Kennesaw location in an old Applebee’s at 543 Roberts Court.

We are so excited to announce that today was our last day at our old location! We will be opening up at our new location on Tuesday July 9th! In order to allow us enough time to move everything to the new store we will be closed tomorrow, Monday July 8th. We apologize for the inconvenience this may cause. We can’t wait for everyone to see the NEW LiviRae! Our new address is 543 Roberts Ct Suite 200 Kennesaw GA 30144.

Unfortunately, it appears that the move was a few months late. On July 3, the landlord filed a “Proceeding Against Tenant Holding Over” that claims the store was supposed to have vacated the property months prior.

Molly was served with the filing on July 11, and her business partner (and Double Divas co-star) Cynthia Richards (aka Cynthia Decker) was served the following day. Once being served, the defendants had seven days to respond. Neither Molly nor Cynthia filed a response, and a default judgment was entered in favor of the landlord on July 24.

On July 31, the landlord’s attorney filed a Writ of Fieri Facias request form. “A Writ of Fieri Facias (or Writ of Fi Fa) is a document issued by the Clerk of Magistrate Court for the purpose of recording a lien on the judgment debtor’s property,” according to neighboring Fulton County’s Magistrate Court website. “It is also a legal instrument by which the sheriff of a county may seize the assets of a judgment debtor.” That does not sound good for Molly!

If you’re wanting to help Molly out, just hop on over to liviraelingerie.com and treat yoself to some bras, panties, and more for Labor Day! If you need a little motivation, here’s Molly’s daughter Olivia Hopkins modeling some of the looks: