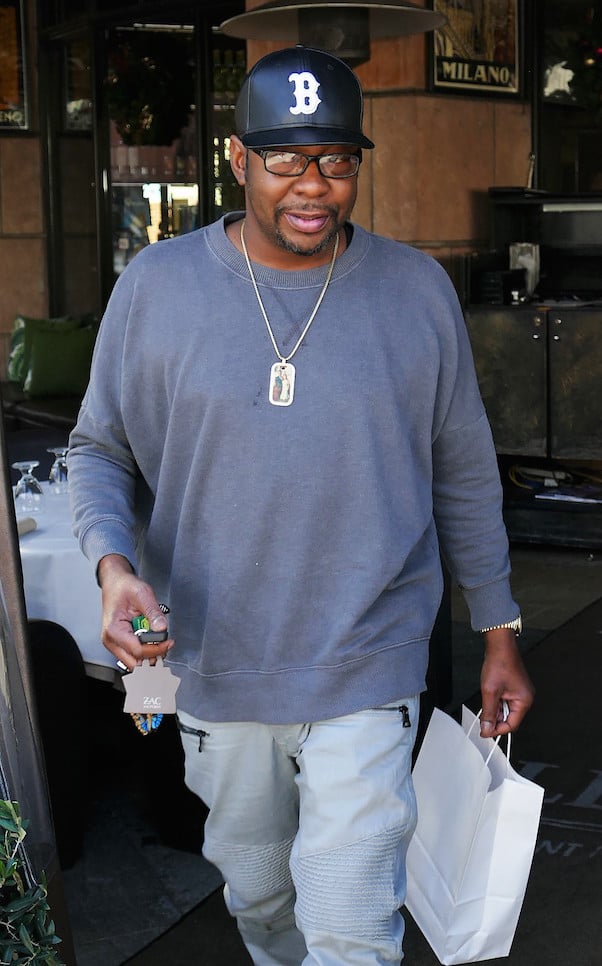 A few days ago, Bobby Brown’s sister Leolah told the world that her brother had been the victim of a terrible hit-and-run and suffered multiple broken bones in both legs. Because Leolah made her claims shortly before midnight, the story was able to percolate on social media overnight and by dawn take on a semi-hysterical “Why aren’t any big sites covering this” flavor. (It almost goes without saying that Leolah’s initial claims were almost completely detail-free.)

By then, Leolah’s tale had gotten enough attention that Bobby’s lawyer, Christopher Brown (no relation) put out a statement saying that none of that was true. And that, for the most part, has been that. Except that Leolah herself is still making wild claims about Bobby’s health, telling anyone who’ll listen that the car accident was very much real — in addition to which she’s further suggesting that Christopher Brown is for some reason orchestrating a massive coverup of his client’s injuries.

To help matters going forward, here’s a brief timeline: Bobby Brown’s sister made her first claims at around 11:30 PM on Sunday, August 25th. We published our article very shortly after that, in the wee hours of Tuesday, the 26th. (Thanks, insomnia!) By the start of the business day on the 26th, Chris Brown had shot down Leolah’s story.

Then, Leolah went silent for a couple of days. If you’re a skeptic — which, presumably, is most of the people reading this article — that long silence is important, given the strangeness of what came next. It wasn’t until August 29th that Leolah responded to Chris Brown’s statement, saying that he had lied “like that to the PUBLIC” and questioning why he would want to “hide and suppress” the truth about Bobby Brown’s car accident.

Mr. Chris Brown you made a HUGE mistake brother! YOU of all people would LIE like that to the PUBLIC and call ME a liar!? So, your not so wise afterall. DUMB MOVE! VERY DUMB my brother…YOU should have NEVER told that LIE! And YOU KNOW and knew before ME that my brother was hit by that car. My question TO YOU is, WHY? WHY would YOU want to hide and suppress THAT TRUTH? Who are you really Mr. Chris? One things FOR SURE is that YOU ARE THE REAL LIAR CHRISSY BROWN! But I’d like to know WHAT your motive for lying is? Because in my opinion, you lied about something that made no sense to lie about…UNLESS! ….More later…

This time, “later” took just three hours. By then, Leolah was convinced that her detractors were literal agents of Satan and that Bobby’s life was in danger. Why? See if you can figure it out: 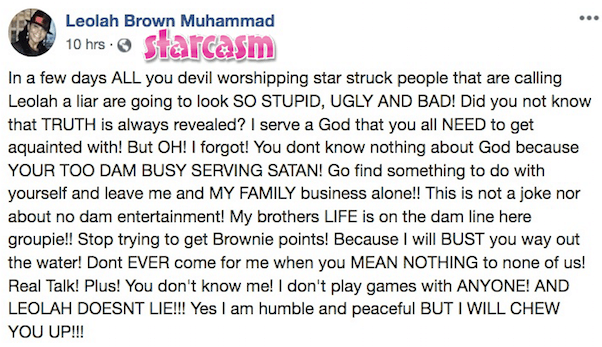 In a few days ALL you devil worshipping star struck people that are calling Leolah a liar are going to look SO STUPID, UGLY AND BAD! Did you not know that TRUTH is always revealed? I serve a God that you all NEED to get aquainted with! But OH! I forgot! You dont know nothing about God because YOUR TOO DAM BUSY SERVING SATAN! Go find something to do with yourself and leave me and MY FAMILY business alone!! This is not a joke nor about no dam entertainment! My brothers LIFE is on the dam line here groupie!! Stop trying to get Brownie points! Because I will BUST you way out the water! Dont EVER come for me when you MEAN NOTHING to none of us! Real Talk! Plus! You don’t know me! I don’t play games with ANYONE! AND LEOLAH DOESNT LIE!!! Yes I am humble and peaceful BUT I WILL CHEW YOU UP!!!

You guys get ready for my LIVE tomorrow..its neccessary that Leolah speaks out! Stay tuned!

However, Leolah’s Facebook Live never happened. And so she went (mostly) quiet again for a couple of days — until an unrelated TMZ story gave her new life. Leolah linked to a video of Bobby that the site featured from back in May, in which Bobby says that he’s forgiven Chris Rock for a joke Rock made about Whitney Houston several years ago. Why is the video relevant? Because Bobby is wearing a brace on his right leg in the clip — not a huge, bolted-in support system for victims of major leg trauma, but a fabric-and-velcro deal. Here’s a screengrab from the clip: 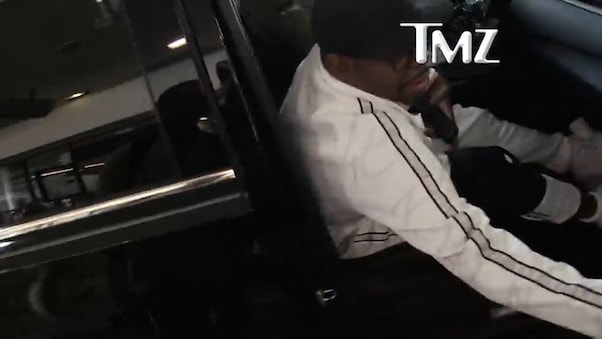 Again, TMZ posted the video on May 20th, so it’s hardly breaking news. But this was where Leolah apparently decided to break. I didn’t even bother with a screengrab for this post, since it’s too long to capture in one image. Follow Bobby Brown’s sister’s lines of logic, if you can:

Hey Chris Brown? LOOK! I GOT A VIDEO FOR YOU RIGHT HERE! Yes YOU who called me a liar?. Take a look!??. Hey world, just take a look at the LEG BRACE on my brothers legs!! And please watch carefully as he walks and sits down!! NOTICE THE BRACE SHOWING ON HIS RIGHT ONE! THE OTHER BRACE IS UNDER HIS LEFT ONE. So, call yourself A LIAR after today Mrs Chris! My brother could barely walk after he got hit by that car! YOUR MOTHER RAISED A DAM LIAR!!! And THE VERY SAD part about it is, CHRIS BROWN YOU CERTAINLY KNEW THIS! AND YOU CLEARLY KNEW IT WHEN YOU STOOD UP IN THE MEDIA AND CALLED ME A LIAR YOU DAM LYING THIEF!! I’m the wrong one to lie on. So, why are you TRYING TO HIDE IT CHRIS! Is that what YOU and ALICIA are both trying to do!?? Are you both telling my brother he has to hide it to save his contracts? YEAH RIGHT! Bobby Brown is BOBBY BROWN and he don’t have to hide no dam accident! I CLEARLY SEE WHAT YOU ALL ARE TRYING TO DO! YOU WANTED HIM TO STAY ON TOUR SO HE CAN GET SICKER AND SICKER! WHAT ABOUT HEALING!?? WHAT ABOUT RESTING! BOBBY DIDN’T NEED TO BE WORKING WHILE IN HIS BRACES!! HIS HEALTH IS FAR MORE IMPORTANT THAN ANY DAM CONTRACT! AND LET’S NOT FORGET WORLD, THAT ALICIA AND CHRIS BROWN ARE BOTH THE PRESIDENT AND VICE PRESIDENT OF MY NIECE BOBBI KRISTINAS FOUNDATION! NO ONE IN THE BROWN FAMILY HAS ANYTHING TO DO WITH MY NIECES FOUNDATION. NOT ONE BROWN! WHY? MY BELIEF IS, THEY SET “THE SERINTY HOUSE” UP TO STRAIGHT DAM ROB PEOPLE! And I don’t believe that that’s the real REASON why you both came up with that idea about hiding BOBBY’S accident. A dam contract! ??Yeah right! In my opinion, IT SOUNDS LIKE SOMEONE’S TRYING TO KILL MY BROTHER AND TAKE OVER HIS LEGACY, ESTATE AND EVEN HIS LIFE! IT’S WAAAAY TOO OBVIOUS TO ME WITH THE WISDOM I HAVE AND WATCHING YOUR ACTIONS! FURTHERMORE, IN MY OPINION AND BELIEF WHOLEHEARTEDLY, MY FEELING IS THAT THE BOTH OF YOU ARE TRYING TO KILL MY BROTHER AND ANYONE ATTACHED TO HIM SO THAT YOU CAN TAKE HIS ESTATE LIKE THEY DID WHITNEY AND BOBBI KRISS! EVERYTHING MAKES SENSE NOW ALICIA! IS THAT WHY YOU PERSONALLY CALLED INTO THAT STATION AND TOLD THEM, IF I LEOLAH BROWN MUHAMMAD WAS GOING TO TALK ABOUT THE PEOPLE (PAT AND NICK) THAT I BELIEVE IN MY HEART HAS SOMETHING TO DO WITH THE DEMISE OF MY NIECE AND SISTER..THAT YOU ALICIA WOULD SEE TO IT THAT MY BROTHER BOBBY WOULD NOT EVER COME ON THE SHOW! WHY WOULD YOU NOT BE ON THE SIDE OF THE BROWNS? KNOWING WHAT TOOK PLACE? AND “WHY” WOULD YOU NOT WANT TO SEE JUSTICE FOR 2 PEOPLE IN THE BROWN FAMILY THAT WERE COLD BLOODEDLY MURDERED? I KNOW WHY! IT’S THE SAME REASON YOU’VE BEEN PUT IN PLACE TO COME IN OUR FAMILY TO DIVIDE AND CONQUER!! YOU AND CHRIS! DAM THIEVING BASTARDS!!! YOU ALL AINT NOTHING BUT DEMONS! PLAYING WITH HUMAN LIVES FOR PROFIT!!!

Bobby Brown himself has yet to comment publicly on any of this. In the past, however, he has publicly derided his sister over her allegations — most notably for her long and agonizing tabloid battle with the Houstons after Bobbi Kristina was hospitalized in 2015. (Note that Bobby’s admonition didn’t stop Leolah from talking.)