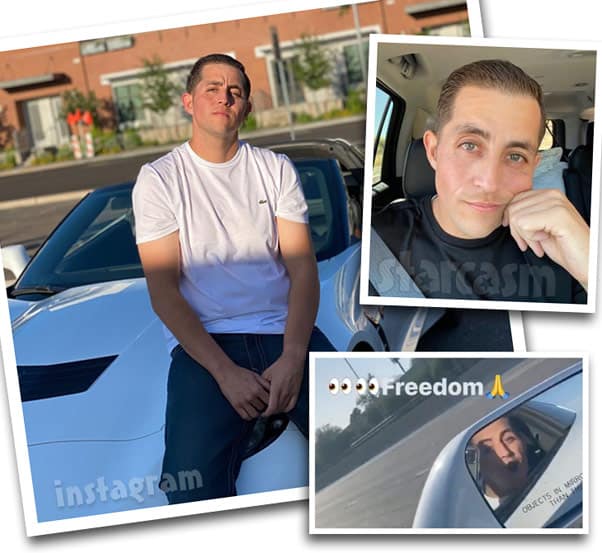 Congratulations are in order for 90 Day Fiance and Happily Ever After star Jorge Nava as he was released from prison on Monday!

The much svelter Jorge took to Instagram to upload a new photo of himself and share a brief video of himself riding in a car. Jorge captioned the clip with “👀👀Freedom🙏”

UPDATE – Jorge has since shared a gallery of three images along with the caption “The sky is the limit🙏 #freedom.” One of the photos is included above. I’m not sure whose Corvette that is Jorge is posing with.

Here is the full gallery posted by Jorge:

The sky is the limit🙏 #freedom

Jorge’s release was three months earlier than previously expected. His release date was listed as August 9 of this year ever since his initial sentencing on September 7, 2018. In case you missed it, Jorge pleaded guilty to a felony count of Attempted Transportation of Marijuana for Sale in July of 2018 after he was pulled over in Arizona in February of 2018 and police reportedly found 293 POUNDS of marijuana in his vehicle.

Jorge recently appeared on TLC’s new spin-off reality series 90 Day Fiance: Self-Quarantined and he revealed during his phone conversation on the show that he would be getting out within a few weeks. He also shared some details about his split from his estranged wife Anfisa Nava and revealed that he plans to file for divorce soon after his release.

Aside from filing for divorce, it’s unclear what Jorge’s plans are now that he is once again a free man. Well, relatively free. The Arizona Department of Corrections lists his current status as being under community supervision. Hopefully he was able to work out a deal where he would be able to parole back in his hometown of Irvine, California.

Jorge has always seemed to embrace his reality star status, unlike his ex Anfisa. My guess is that will will DEFINITELY be seeing him on TLC again soon, the only question is in what capacity. The network has opened the doors on their 90 Day fiance: Happily Ever After series to single cast members, so I am guessing that will be the most likely fit. Other options would be Pillow Talk (With Jorge’s buddy Ramone I hope!) or 90 Day Fiance: What Now?

There have been some (myself included) who have joked about Jorge joining WEtv’s Love After Lockup, which has the same production company as the 90 Day Fiance shows. I seriously doubt that would happen, mainly because TLC and Sharp Productions are well aware of Jorge’s value. Perhaps they could arrange a blockbuster franchise trade where TLC sends Jorge to WEtv in exchange for Clint Brady dating a woman from Ukraine? I’d watch the heck out of both of those story lines!

All joking aside, CONGRATULATIONS to Jorge! Something tells me that more than just his physical appearance has changed during his time behind bars, and I’m guessing most of those changes are for the better.

UPDATE – Jorge did an Instagram live session and he revealed that he does have something in the works, but it’s a secret. Such a tease! He also revealed that he has to stay in Arizona for a couple of days until he is able to get permission to go back to California.

Here’s a cropped clip from the live session in which Jorge talks while riding around in a convertible Corvette in Scottsdale, Arizona:

He’s out! @mrjnava_ what do you think Jorge will do now?

Get your signed Paola Mayfield calendar now for $59.99