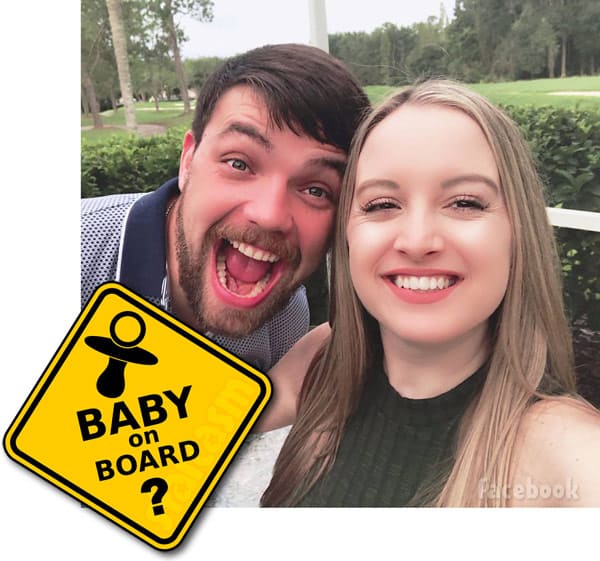 It looks as though congratulations may be in order for 90 Day Fiance Season 5 couple Elizabeth and Andrei! Elizabeth’s brother-in-law revealed on his radio show this morning that “They got a baby coming!”

The scoop came via Orlando Davis, husband of Elizabeth’s sister Jaylyn and host of the “Orlando and the Freak Show” morning show on Tampa radio station Wild 94.1. Orlando was doing a “Plead the Fifth” segment — included below — in which he answered or refused to answer questions from his co-hosts and listeners.

It was a listener who hit Orlando up about whether or not he got along with Andrei. After revealing that he liked Andrei, Orlando then spilled the tea about the baby news.

Here’s how the conversation went down with a few unrelated items edited out:

COHOST: This one says on the text, “Orlando, you appeared on the show 90 Day Fiance –”

ORLANDO: I did not.

COHOST: This is what it says.

COHOST: OK, alright. If you did, which you said you appeared on it —

ORLANDO: [Laughing] I didn’t say I appeared on it!

ORLANDO: [Laughing] Do I like Andrei?…Yeah! Andrei is married to my sister-in-law. They were on the show 90 Day Fiance.

COHOST: And he’s a good guy?

ORLANDO: Yeah, he’s a good guy. He takes care of his wife. They got a baby coming. So yeah, they’re doing their thing.

Neither Elizabeth nor Andrei have mentioned a pregnancy on social media. So, if Orlando is correct, I’m guessing he’s in the family dog house right about now!

Just last week, Elizabeth shared an Instagram post celebrating the one year anniversary of Andrei being in America. The two appear to be EXTREMELY happy together, and having a baby on the way would be more icing on their happily-ever-after cake. On that note, then, let me say CONGRATULATIONS to the happy couple!

UPDATE – Elizabeth and Andrei have confirmed that she is pregnant! Click the link for all the details, including whether the couple is having a boy or a girl AND their reaction to Elizabeth’s brother-in-law leaking the news!

Thanks to redditor @ilovemydogsam for actually being tuned in to the radio show when it happened and letting the 90 Day Fianceverse know! From there, it was fairly easy to track down the hard “evuhdense.” ??

90 DAY FIANCE Molly and Luis fight in cell phone video, is it the domestic violence evidence Luis hinted at?