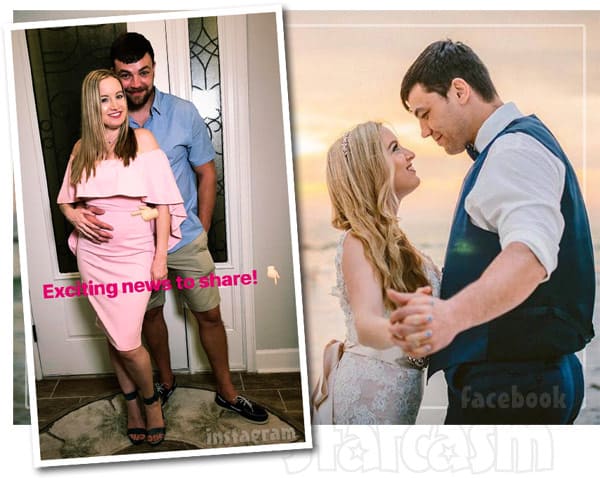 We first reported that 90 Day Fiance Season 5 couple Andrei and Elizabeth Castravet were pregnant with their first child two weeks ago, and on Monday the couple finally confirmed the happy news in multiple videos and an interview!

“We have some very exciting news to share,” Elizabeth says in a clip uploaded to TLC me as husband Andrei chimes in: “VERY exciting!” Elizabeth continues: “We just recently found out that… [both together] WE ARE EXPECTING!”

The couple reveals that they will be having a little girl, and the video includes some photos from their gender reveal party.

“When I first found out, it was almost a relief for me because I was feeling really strange, and just not myself,” Elizabeth admits. “I had a feeling it would be a girl,” she continues.

Andrei was even more confident. “I knew it all the way that I’m going to have a girl,” he boasts. “I never thought of a boy, honestly.”

The soon-to-be first-time parents then talked about their hopes for lil Liz. “I hope that the baby will have Andrei’s sense of humor,” Elizabeth says. “He’s super goofy and silly. He just has a very unique sense of humor, so I hope that she has that.”

Andrei and Elizabeth laugh a bit before he reveals his hopes. “I want confidence, that’s what I want to see in my child.”

The couple posted a similar announcement video on Instagram:

Andrei and I ARE SO EXCITED to be able to share this wonderful news with you! ?????? Thank you for your continuous love and support! #90dayfiance #elizabethandandrei #babyontheway #90dayfiancebaby #preggers #hungry #babygirl #love #husbandandwife #TLC @tlc @andrei19861

A post shared by Elizabeth Potthast Castravet (@elizabethpotthast) on Oct 14, 2018 at 6:55pm PDT

In addition to the videos, Andrei and Elizabeth also spoke a bit with Cosmopolitan about the pregnancy, and the fact that Elizabeth’s brother-in-law spilled the beans about it on his radio show more than two weeks ago.

Elizabeth reveals that she found out she was expecting way back in May while on a road trip with Andrei in Florida, which was quite a shock because the baby wasn’t planned.

Elizabeth then stressed out about telling her dad, with whom she still has some issues with. But, she says her pop is very excited about the new grandchild on the way, and he was in attendance at the couple’s gender reveal party. As far as the couple’s future, they reveal that Andrei is still in the process of getting his green card, and also that they plan to return to his home country of Muldova for a second wedding next year.

So, what about Elizabeth’s brother-in-law Orlando Davis leaking the pregnancy news? In case you missed it, Orlando (who is married the Elizabeth’s sister Jaylyn) was hosting his “Orlando and the Freak Show” morning show on Tampa radio station Wild 94.1 on October 1st when he was asked by a listener what his thoughts were about Andrei. “He’s a good guy,” Andrei said. “He takes care of his wife. They got a baby coming. So yeah, they’re doing their thing.”

“I was extremely, extremely upset, and I still am,” Elizabeth says of Orlando revealing the news early. “We’ve done such a good job of keeping it hidden. We literally never talk to him, and we feel like he probably saw an opportunity to get some ratings on his show. We never said he could say anything.”

Andrei was also not very happy. “The question was totally different,” he says. “He had a question, supposedly from a fan, and it was, ‘Does he like me or not?’ I don’t know why he had to reveal.”

In Orlando’s defense, I listened to the full segment and it really did seem casual and not intended to steal any thunder. If he really saw it as “an opportunity to get some ratings on his show,” I believe he would have made a bigger deal about it. You can listen to it in our original post here and decide for yourself.

Congratulations to Elizabeth and Andrei! They are one of my favorite couples on the show that I don’t just like because they are a complete mess! It brings a big smile to my face thinking of those two as parents 🙂