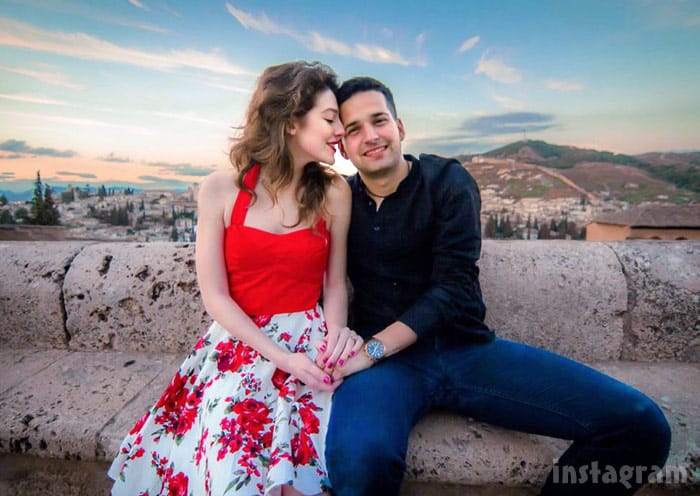 On the new season of 90 Day Fiance, TLC introduced viewers to Evelyn Cormier, an 18-year-old musician from New Hampshire, and her 27-year-old Spaniard beau David Vazquez. Evelyn seems completely smitten with David, and she is confident that her decision to walk down the aisle at such an early age is the right choice as she has faith that love and God will provide all they need. But did Evelyn’s confidence remain unwavering? Did she and David actually walk down the aisle and get married?

The answer to that question, which will probably not surprise viewers in the least, appears to be “yes.” The couple signed up for multiple online wedding registries (love and God are just responsible for providing the essentials, but friends and family had to buy the Nutri Ninja Pro BL450 900 Watts single-serve smoothie blender — which someone apparently did) with a wedding date of October 21, 2017.

Unfortunately, New Hampshire does not make recent marriage records public, so I was unable to confirm that the two officially got married (as I did with Elizabeth and Andrei), but there were other online sleuthing options available.

TLC put a quarantine on wedding photos, and amazingly I couldn’t find ANY pictures of the wedding that slipped through the cracks. I did, however, find photos of family and friends gathered for the wedding reception and other events in Claremont in and around October 21.

That usually wouldn’t be much of a confirmation, but included in the photos are David’s parents and his sister — who all flew in from overseas for the event. Also present was David’s cousin, who is currently an actor in Los Angeles. He posted several photos that he tagged with #familywedding, including one of David’s family at what appears to be the wedding reception or rehearsal dinner. In the background you can see a camera man, whom I assume was capturing the dinner for 90 Day Fiance: 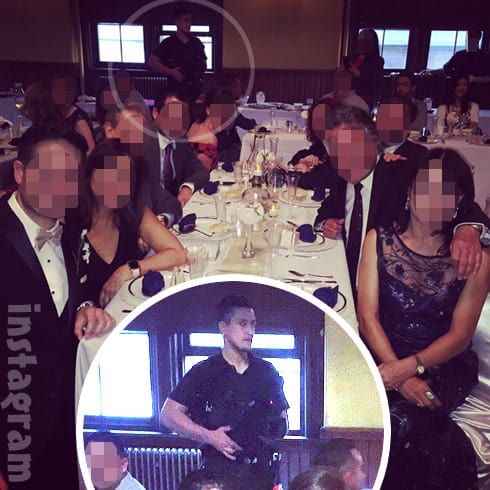 There is also a camera crew present for another photo taken the day before the wedding in which David’s cousin is seen at a clothing store in a tuxedo. He captioned the picture with “Fitting day” before adding the hash tags #groomsman #cousinswedding and #fun.

On one of the photos posted by David’s cousin on Facebook, a commenter wrote “Felicidades a los recién casados que sean muy felices,” which translates to “Congratulations to the newlyweds who are very happy.”

David’s sister posted a photo of herself in a formal dress on Instagram and wrote “A day to remember.” All of the secrecy inevitably led to some confusion among the family’s social media followers, and someone responded to the photo by asking David’s sister if she got married and if congratulations were in order for her. “Hahahahaha my brother,” she replied.

As a result, I feel I can say with 99.9% certainty that Evelyn and David did get married on October 21. I will confess that I was a bit disappointed that I was unable to track down a photo of Evelyn in her wedding dress, because she is most certainly one of the most photogenic cast members the franchise has ever had! Ah, but I suppose we will all get to see it soon enough.

Congratulations to David and Evelyn! I know that may not sit too well with a lot of viewers, as Evelyn has surprisingly emerged as one of the most polarizing cast members to ever be on the show. Her detractors seem to feel that she gives off a self-righteous vibe and she comes across as a bit overconfident given her age. Unfortunately, those detractors have been a little less than courteous in expressing their opinions, resulting in Evelyn posting this response before deleting her personal Facebook page:

I can’t believe the hate out in this world. That people saw who don’t even know me somehow convince themselves that they do, and that they have some sort of right to be utterly cruel and nasty to me. Why? Because you watch a 3 minute clip of me on a highly edited reality show so now you know me? You are all mothers, fathers, sisters, brothers…with beautiful families…what part of you woke up this morning and thought how wonderful it would be to reach out to me and say the most cruel and hateful things? People, it is a tv show for entertainment purposes. What you are watching is not really “Reality”. *Spoiler Alert* David and I are very happy, believe it or not. We work through our differences and find common ground. You are watching edited clips of things that happened, then are cut and pasted and put together to appear as if it really happened that way. Sit back, relax, make some popcorn and enjoy. Getting triggered and sending me hate really shows me more about you then about myself. God bless you all…and hey, thanks for watching! ♥

I will confess that I’m a little put off by Evelyn, but I TOTALLY agree with her about all the hate and vitriol! That being said, she agreed to go on a reality show and people are pretty much free to be as mean as they wanna be. Personally, I think #Davelyn have perhaps the best chances of having a long-term relationship out of all the couples on the current season, and I wish them all the best.

For more 90 Day Fiance Season 5 spoilers, click on the couples below to find out if they tied the knot or not:

You can keep up with Evelyn, David, and the rest of the 90 Day Fiance couples with new episodes airing Sunday nights at 8/7c on TLC. I will let Evelyn send us home… 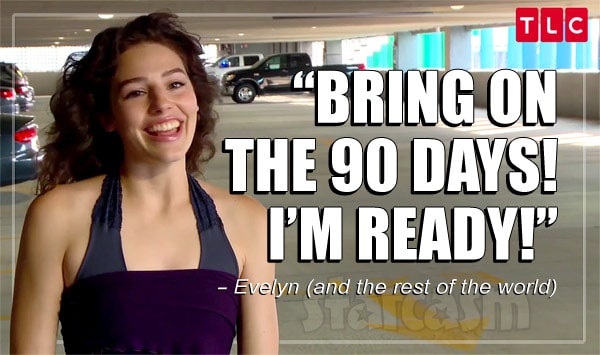 Is Kylie Jenner engaged to Tyga?

90 DAY FIANCE Leida tried to kill herself with a knife, Eric stopped her, according to ‘leaked’ texts