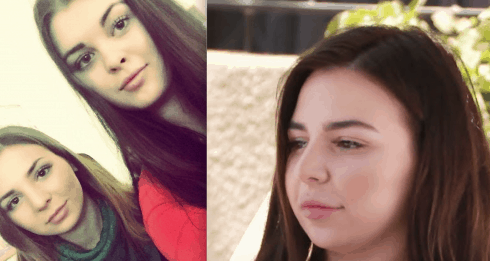 Anfisa Arkhipchenko made a splash on 90 Day Fiance with her desire to experience the fine life in the U.S. with Jorge Nava. The Russian beauty started off this season’s first episode of 90 Day Fiance: Happily Ever After by learning that her husband Jorge isn’t a millionaire like she thought, and is actually $30k in debt.

Anfisa is beautiful, but the 21-year-old has already had her body altered by several different plastic surgery procedures. Jorge helped pay for a boob job, nose job, and she reportedly has plans for a chin surgery. She also now regularly gets her lips injected. The above photo, which surfaced on Reddit, shows Anvisa’s (left) lips before they were ever touched by a need.

Anfisa has recently defended the reality of the relationships on 90 Day Fiance, but even though she may have dated Jorge for a year before their 90 day marriage visa, their relationship has appeared to be on shaky ground since the moment she arrived in the U.S. They shocked viewers by going ahead with their marriage even though Anfisa has been brutally honest to Jorge about her desire for money. After marriage she’s said that she hates being married to him. On the way to get approved for her green card, Anfisa told Jorge she was going to leave him as soon as she got her green card.

A little over a month ago the now-deceased Stevie Ryan spilled tea on Anfisa and Jorge, saying they were now split up and Anfisa is now working as a stripper and cam girl. The couple’s scenes on the show are just endless icy tension only broken up by fiery screaming when Anfisa doesn’t get what she wants.

90 Day Fiance’s Melanie and Devar to be on Dr. Phil after TLC blocks Jason and Cassia?

90 DAY FIANCE What will Anfisa do for money while Jorge is in prison? Will her YouTube channel be enough?