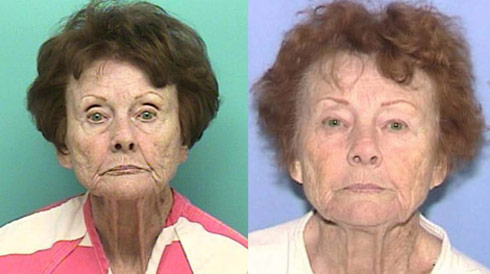 Don’t let the memaw persona fool you, 84-year-old Dorothy Canfield is an ice-cold criminal with a mind for murder.

Canfield has been accused of attempting to hire a hit man to kill the prosecutor who handled her case and to have that guy’s boss, “put in the hospital for two to three weeks.”

Dorothy has been spending her days cooling loafers at the Montgomery County Jail, in Texas, after she got sent up to the big house for a second degree felony theft charge. A confidential informant notified authorities of her heinous plan, which led to the Texas Rangers monitoring her communications.

After recording this blood-money offer, the Rangers questioned Canfield on her plans. During the interview, they showed her a photograph from an unrelated crime scene and pretended that Freyer was murdered. After doing so they said that Dorothy Canfield showed no remorse. She eventually confessed to the crimes, the D.A.’s office stated.

Ligon, one of her intended targets, wanted to make it patently clear that Canfield’s age would have nothing to do with how his office would approach prosecuting her:

“If you’ve got the motivation, the means to make it happen, it doesn’t matter your age. It only matters what your intent is. The contract already was sealed. The fact of the matter is the person she was trying to hire was a very robust, young guy that was able to carry out her intentions. Don’t get lost in the fact what her age is.”

This murderous plot comes at a time of heightened sensitivities and security for district attorneys across the Lone Star state. In late March, Kaufman County District Attorney Mike McLelland and his wife, Cynthia, were found dead in their North Texas home. This tragedy came just two months after one of his assistant prosecutors was assassinated. Those murders are still under investigation with no arrests made.

“Dorothy Canfield hoped to capitalize on the tragic murder of the Kaufman County district attorney, his wife and assistant district attorney Mark Hasse to disrupt the prosecution of her theft charge in the most violent way possible.”