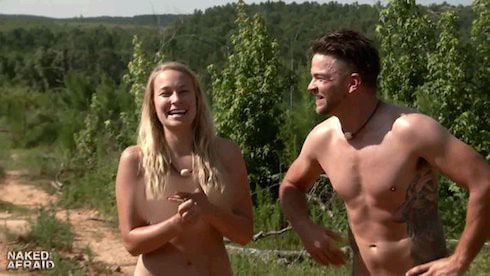 Discovery’s Naked And Afraid inspires questions of compensation more than perhaps any other reality TV show. How much do the Naked And Afraid contestants get paid for doing the show? It’s not an inconsiderate sum; given what the participants have to go through to get the money in the first place, though, a better question might be whether they get paid enough.

According to the official rules that Discovery updated for casting Naked And Afraid Season 4, successful participants on the show will receive a grand total of $5,000 for all their sweat, blood, misery, and nudity. Though the rules were posted back in 2014, they’re still there today, which means it’s safe to assume that they held true for Naked And Afraid Season 5, as well.

You can read them in their entirety here; the following is the portion of the contract that addresses the “Do the Naked And Afraid contestants get paid” question:

5. CONTEST PRIZES: One (1) grand prize each will be awarded to one (1) male and one (1) female entrant consisting of an opportunity to appear in the Discovery Channel television program “Naked and Afraid.” (the “Prize”). The prize includes the following: Round trip flights for each winner to an undisclosed survival location in coach class; (2) nights in a local hotel for two people, the opportunity to film an episode of “Naked and Afraid” and $5000 cash. Approximate Retail Value (“ARV”) is TBD. Actual retail value may vary and Sponsor will not award the difference between the ARV and actual value.

So the immediate answer is: Yes, the people on Naked And Afraid are compensated for their time. But we’re talking about three weeks in near-total isolation, without any clothes–and a seat in coach to get there. Is $5,000 enough money to suffer through all of that?

As you might expect, most contestants seem to think of the money as a secondary benefit, when they think of it at all. Season 2 contestant Jeff Zausch once explained his attraction to the show in positively primal terms: “What I always say is ‘This is who we are. This is what we are made of.’ Some people were made to be race car drivers. Some people were, you know, made to be CEOs of companies. We were made to push the limits of what’s humanly possible.”

And it helps that the requirements for getting on the show are pretty serious to begin with. Last year, casting director Kristi Russell gave a seriously wide-reaching interview to Channel Guide Mag; it’s all but essential for serious fans of the show. In it, she revealed that you need more than just basic survival skills to get through the Naked and Afraid screening process.

“If you can come to us and prove that you can start fire in more than one way,” she said, listing the attributes that help separate the successful from the others, “[if] you have a really deep and wide knowledge of shelter building, and if you can name three or four ways to get water…you’ve got a huge leg up on everyone else.”

However, even Kristi had to acknowledge that most of the reward of the show is the experience itself–that, and the sense of triumph that contestants have after completing the challenge:

CG: My number one question that people ask me is, “Do people get paid?” That’s what everyone wants to know. They’re like, “What’s the prize?”
KR: There is no prize.
CG: But I’m assuming people will get some kind of stipend just so that they are not going broke…
KR: Yes. We’re taking them away from their job and we realize that, and so we give them a weekly stipend to compensate for their lost wages, but no, there is no prize.
CG: The prize is to hop on that helicopter and lord over the land that you’ve just survived in for over 21 days.
KR: (Laughing) Exactly!

Naked And Afraid airs Sunday nights at 10 PM on Discovery.

(Photo credits: Do the Naked And Afraid contestants get paid via Twitter)