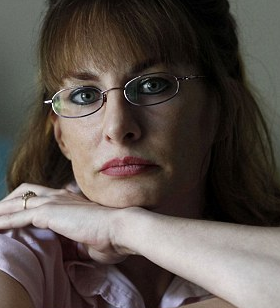 39-year-old Florida resident Gretchen Molannen committed suicide over the weekend because she’s suffered from a rare genital arousal disorder that gave up her up 50 uncontrollable orgasms a day for 16 years.

The Tampa Bay Times profiled her just a few days before she killed herself, and she’s had three prior suicide attempts.

She spoke fluent French and German, and at the age of 23 was hoping to find a career as a translator when she suddenly started feeling sexually aroused out of nowhere.

“I was terrified. I couldn’t get unaroused. I didn’t know what to do.”

Sexual contact only made her agony worse, but she still wanted relationships, and even got nose and boob jobs (paid for by a boyfriend) to make herself feel attractive. She had trouble holding down a string of jobs like answering phones and selling jewelry because she was constantly going to the bathroom to relieve herself. While the newspaper was interviewing her, Gretchen applied for and was turned down disability payments because she had been unable to work since 1999. She was terrified by the prospect of having to tell a judge about her condition, because people usually respond to the fact that she’s constantly experiencing orgasms with a chuckle. When she did go before the judge, he wouldn’t look at her, and ultimately decided she didn’t meet “impairment” requirements.

Over the course of her life she’d been to every doctor imaginable, but none were able to find any treatments that offered her relief. The constant arousal even led her her develop other diseases like interstitial cystitis.

Here’s how Gretchen described what life was like for her:

“You have to ignore it, Gretchen. YOU DON’T HAVE A CHOICE. STOP NOW. Just let your body calm down. Many times, I’ve tried that. I’d be as far as in the bathroom, going in for my reward shower. I’m done. Now it’s time to clean up and relax. And I’d look at myself in the mirror and there it is again. And I’d throw myself on the floor and cry.

“Men don’t understand it. They don’t care. They think it’s hot . . . When I describe it to men, I tell them, ‘Imagine having an erection that does not go down, that feeling of just before it comes out, all day, all night, no matter how many times, no matter how much you’ve destroyed the skin on your penis.’

Florida mom fends off 5 dogs to protect daughter, airlifted to hospital after mauling