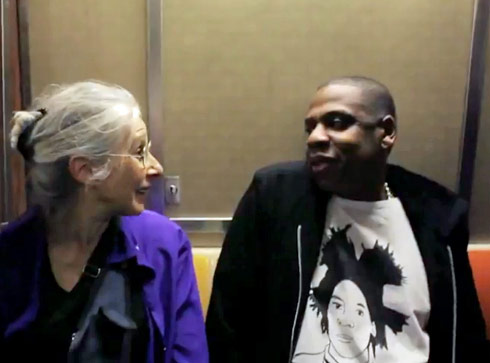 A new documentary called Life + Times focuses on rapper Jay-Z’s involvement with getting the new Barclays Center arena built in Brooklyn. In a brief segment released from the 34-minute piece Jay-Z shows his cordial side as he chats it up with a friendly older woman named Ellen who doesn’t know who he is.

Jay-Z played 8 shows at the new digs and for his final performance he opted to take the R train over one of his multi-hundred-thousand-dollar rides. This subway surprise obviously creates a stir among the many peeps who knew they were riding with Mr. Carter. But the exchange between Jay-Z and Ellen gives a glimpse into how down to earth someone in the stratosphere of superstardom can be if they want to. Check it out!

Ellen: Are you famous?
Jay: Yes. Not very famous, you don’t know me.
Ellen: I don’t know you, but…
Jay: But I’ll get there some day.
Jay: My name is Jay. What’s your name?
Ellen: Ellen. What do you do?
Jay: I make music.
Ellen: Did you just do a performance?
Jay: I’m on my way to the performance at the new Brooklyn arena.
Ellen: Oh, fabulous!
Jay: I performed eight shows, actually… This is the last show.
Ellen: And you’re going by subway?
Jay: Yes.
Ellen: I’m proud of you. Say your name again, just so I get it.
Jay: Jay. Jay Z
Ellen: Oh, you’re Jay-Z! I know about Jay-Z.
[Shared laughter]

It turns out that the lady in the clip is Ellen Grossman, a well-respected figure in the New York City art scene. When asked about her sudden notoriety stemming from her R train rendezvous with Jay-Z Ellen told The New York Times, “I think the world is in the mood for a sweet, old lady.”