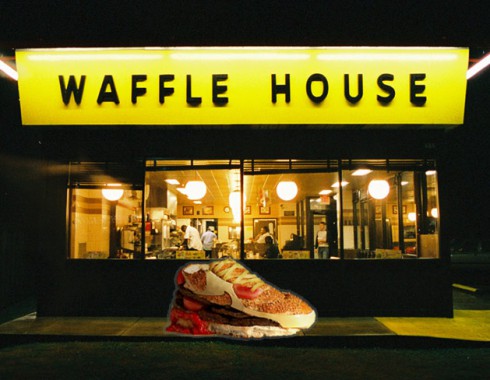 The only thing this southern boy loves more than a late-night run to Waffle House is a story about seriously drunk southern people doing hilarious things at Waffle House. And thus I bring to you the story of a cheeseburger in paradise by the dashboard light!

Early Sunday morning in Loganville, Georgia a couple found each other as irresistible as a pecan waffle with a side of grits as they decided to get it on in the backseat of a Dodge pickup truck in the parking lot of an area Waffle House.

A cop happened across the scene and witnessed the two engaging in the shenanigans and noted that the vehicle smelled strongly of alcohol.

The officer asked that the couple put their darn clothes on and show some identification and the man did just that, putting his pants on immediately. The woman wasn’t as easily motivated and just sat there in the passenger’s seat naked in spite of multiple requests from the officer for her to get dressed.

Finally, said Waffle-woman finally did her best to get something on by slipping on a cheeseburger as if it were a sandal, this according to a police report via the Loganville Patch. I mean the walk of shame is bad enough when it’s from the truck to a patrol car but when you have cows wanting you to wear mor chikin on your feet – – that’s double-cheeseburger tough!

Even though attempting to sport a cheeseburger as footwear would seem to forgo the need, the officer performed a breathalyzer test on the pair which they failed pretty darn miserably. The man blew a 0.154 and the woman blew a 0.216.

The man claimed they had walked to the vehicle from local hang-out Bruceys and that the truck had been parked at the Waffle House all day.

The pair were arrested on public drunk and loitering charges.