Now that Caitlyn Jenner has come out as a woman, many have began wondering about the blurry areas of her transition. Topics such as her sexual preference (Is she a lesbian?), her family name (Will her children continue calling her dad?), and her title as an Olympic gold medal winner (Will she get to keep her medal since she competed in a male event?) have all come into question.

If it were up to concerned citizen Jennifer Bradford, Caitlyn Jenner would be stripped of her medal. It’s Jennifer’s opinion that Caitlyn shouldn’t retain the rights to her gold medal since she participated in a male event. As a result, she created a petition on Change.org outlining her argument:

It has recently come to light that gold medalist Bruce Jenner is in fact transgender, and therefore, identifies as a woman. We congratulate Ms. Jenner on these new developments and wish her the best. However, this creates somewhat of a problem as Ms. Jenner (as talented as she is) claims that she has always believed herself to be truly female, and therefore, was in violation of committee rules regarding women competing in men’s sports and vice versa. Therefore, it is with a heavy heart that we must ask whether or not it is proper that Ms. Jenner should retain her olympic records in light of this, as we must now either claim that Bruce Jenner and Caitlyn Jenner are two entirely different people (which we know is not true), or that Bruce Jenner was, in fact, a woman participating in a men’s event. It is only fair to all involved that women receive their credit as champions of the Decathalon and that the men racing Ms. Jenner are not expected to compete with a superior, streamlined being such as herself.

We urge Ms. Jenner to support the transgender community by giving up the medals earned by competing against the wrong gender.

Thank you, and congratulations to Ms. Jenner for her courage!

Jennifer created the petition last week. Since then, nearly 15,000 people have signed their names in support. And, even though Jennifer spoke highly of Caitlyn and congratulated her courage, many are calling the petition insulting. 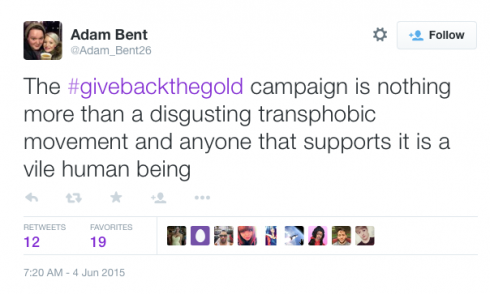 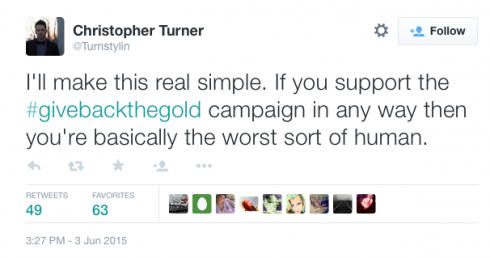 The International Olympic Committee agrees. In a statement made yesterday to Yahoo, IOC Communications Director Mark Adams made it clear, “Bruce Jenner won his gold medal in the 1976 Olympic Games and there is no issue for the IOC.”

This isn’t the first time the IOC has had to address concerns between male and female competitors. Yahoo went on to explain:

The IOC has had difficulty in the past defining the difference between men and women as it pertains to athletic competition. While it’s rare, several athletes — mostly women — have been found to have genetic anomalies which place them somewhere in between traditional labels of “male” and “female.” In 2012, the IOC announced it would allow transgender athletes to compete against their chosen peers, assuming they meet three criteria: the athlete must have had gender reassignment surgery, the athlete must have legal recognition of his or her assigned gender in his or her home country, and the athlete must have completed at least two years of hormone therapy.

So there you have it: Caitlyn Jenner will remain the winner of the 1976 decathlon and get to keep her gold medal.

Do you agree with the IOC’s decision to allow Caitlyn to keep the gold medal she won while competing as Bruce Jenner?