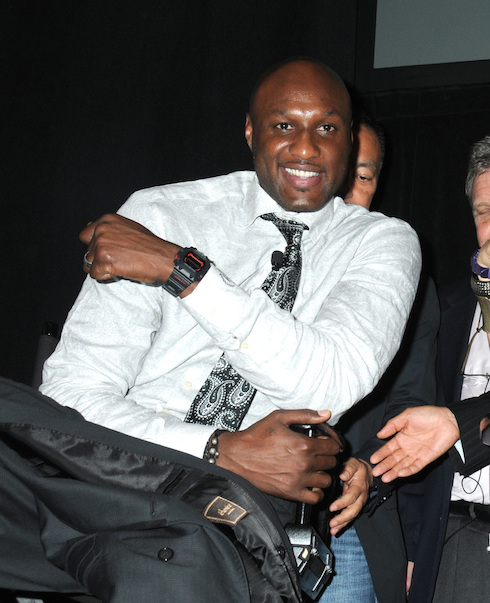 Though Lamar Odom’s overall prognosis is still good, it appears a Lamar Odom setback is affecting the former NBA star in his ongoing recovery from a seizure and drug overdose. While recent reports stated that Lamar Odom expected to leave the hospital soon, the most recent claims state that he’ll have to spend Christmas in his hospital bed–though Odom will be surrounded by family. Read on for the latest.

The two most recent Lamar Odom updates pointed to general good news for the two-time NBA champion. Last week, Odom was allegedly preparing to bring his time at Los Angeles’ Cedars-Sinai Medical Center to a close and return home. And, earlier this week, Lamar’s estranged wife Khloe Kardashian offered an updated Lamar Odom recovery timetable, saying that while it would take “a year and a half or two years” for Odom’s physical and mental rehabilitation, he would likely be moving into a specialized rehabilitation center sooner rather than later.

It appears that those estimates might have been a bit premature, however. An E! report states that Odom will in fact spend Christmas in his hospital room, with family and friends. Though Lamar Odom’s family is “optimistic” about getting him into a rehab facility soon, doctors have apparently been unable to confirm that Odom is well enough to make the move. The family’s center of choice is in Calabasas CA–home of Khloe Kardashian, along with the rest of the Kardashian family.

At the same time, though Odom continues to “struggle” with his memory, and allegedly has a hard time remembering the names of those in the room with him–including, at times, himself.

Chuy Bravo breaks foot on the set of ABC’s Splash, can no longer compete