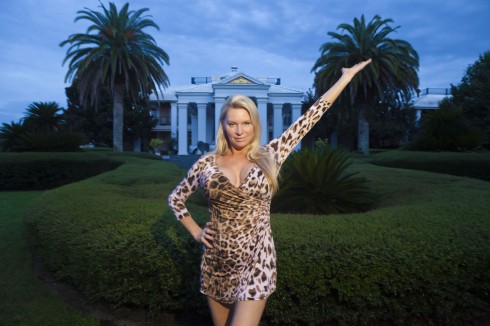 The Siegel Family’s Orlando Versailles, an unfinished house that will be the biggest in the U.S., has become a symbol of the economic times. It’s an icon of wild success and flagrant excess, and also of financial turmoil and ruin. It’s a bit of a Pheonix rises from the ashes of an almost foreclosure.

According to Jackie Siegel, things are back on track with the 90,000-square-foot mansion inspired by France’s 17th century Palace of Versailles. But why was it even built in the first place?

Jackie spoke to OK Magazine about why the mansion was built, and why it has 11 kitchens. Seriously! Who needs 11 kitchens?

“Actually, we just decided to build something that had everything that I wanted, everything David wanted, and it’s the house for the rest of our lives. And we didn’t even know it was the largest home in the country. But I think with the movie coming out, it just brought so much awareness. It is the largest single family home that’s actually lived in America.”

We have a commercial kitchen and we have guest suites which all have their own kitchens and then we have staff quarters and each staff has their own private apartment and so it just kind of adds up.

On how the house compares to the house Jackie grew up in:

Oh yeah. The most expensive home I would ever had dreamed that I would ever live in before I went out into the world was like a $100,000 house. That was my dream. I would’ve never, I just couldn’t imagine living in or building a home like this. You only see those type of homes on TV, from where I live.

Even though the documentary about the home and their family showed some tension in Jackie’s relationship with her husband David, and he has sued the filmmakers since then, Jackie says they’re now closer than ever. The house is estimated to be done in three years when David is 80, and Jackie has big plans to host big parties and charity events in the giant ballroom.

Queen of Versailles, the documentary about the Siegels, makes it’s television premiere tonight on Bravo at 9 EST. Jackie will appear on Watch What Happens Live at 11.