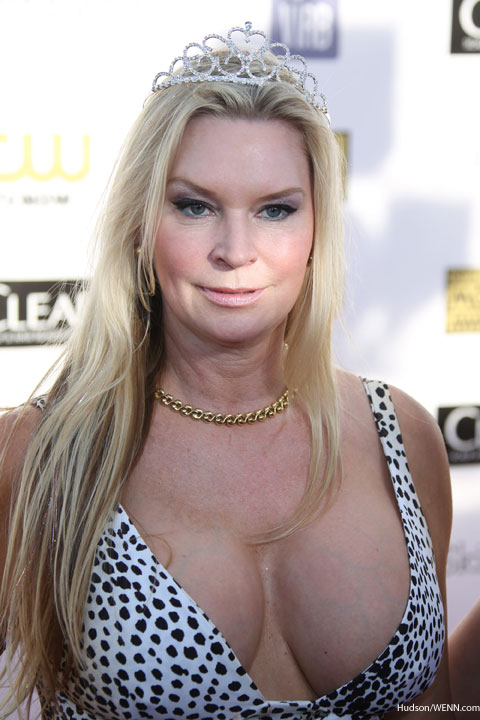 Jackie Siegel, the subject of Lauren Greenfield’s enthralling 2012 documentary Queen of Versailles, is gunning for her own reality show. Right now there’s no word if she’ll get a reality series, but Bravo will premiere her movie on cable Monday night (April 29.)

The documentary follows Jackie, her billionaire husband David Siegel, and their family as they attempt to complete the biggest house in the U.S., a $75 million beast of a mansion inspired by Versailles. They hit a snag when the economy tanks and takes along David’s time-share business. He doesn’t lose the business, but times get so tough at one point Jackie exclaims that they may have to tell the kids that they’ll have to go to college and get careers. The horror!

Even though her husband has sued Greenfield twice, the mother of eight told The Today Show that looking back, she wouldn’t do anything differently: “What I would do different if I had known so many millions of people would be seeing it… is I would have worn more makeup.”

So, what is Jackie up to since filming ended? What happened to “Versailles”?

Filming ended on the doc a few years ago when things were still pretty rough for the Siegels and it looked like they might have to lose the investment they made in the house. David Siegel was able to rescue the house from foreclosure, and said he was angry at the film for the way it portrayed his company, Westgate. “I can handle people criticizing me or my family,” he said in a statement when the film was released last year to much aclaim. “What I don’t like is someone manipulating reality to make it seem as if our company is unhealthy or doesn’t do business the right way.”

In an interview from a few days ago with the Orlando Sentinel to promote the Bravo airing, 47-year-old Jackie says that they now own Versailles “free and clear,” and it should be completed in three years, just in time for David’s 80th birthday.

Jackie is excited about appearing on Watch What Happens Live with Andy Cohen, and says she’d like to do a reality series. “I’ve been approached by a ton of people. We’re trying to figure it out.” As for the lawsuits her husband brought against Greenfield, Jackie washes her hands of the situation, saying the litigation is David’s “issue.”

She does say, however, that he fought to have a positive update on his business at the end of the Bravo showing so people feel confidant investing in his timeshares. She says the whole process taught him to no longer be reliant on cheap debt the way he was pre-crash. “He’ll be debt-free in a year and a half,” Jackie says. “He says he’ll never be a slave to the banks again. He learned a lesson. A lesson of the movie, on all levels, is no matter your budget, live within your means, because you don’t know what’s coming around the corner. You may think the money is always coming. It can change on a dime.”

Greenfield, the director, doesn’t plan on directing a reality series, but she says the screening on Bravo was her “dream choice. It’s one of the things that I’ve always been able to do, hit a highbrow audience and hit a wide audience,” the director says. “And Bravo is kind of a mixture of both – it’s a great audience and it’s a wide audience. And, it’s not the typical independent film audience.

“I think what’s so special is that Jackie as a subject can be relatable on both sides and I think that people are going to come in thinking this is going to be an entertaining romp and leave with a much deeper sense of what happened to all of us and the kind of morality tale and more serious nature of the film,” she continued. “So, I was really pleased that Bravo wanted to do it.”

UPDATE: On October 1, 2013, the Siegels had a segment on Good Morning America saying that they are determined to finish their Versailles. “Whatever it takes to finnish it, that’s what I’ll spend,” David Siegel said.

It still appears to be a long way from being done, but they are going all out, including adding a golden elevator to Jackie’s 4,000 sq. ft. closet.

Click here to find out why the Siegels decided to build “Versailles” in the first place.

Why did David and Jackie Siegel build “Versailles,” the largest house in the US?