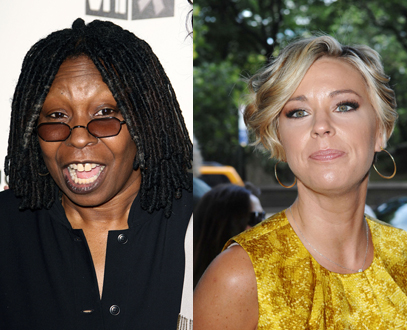 Whoopi Goldberg confronted Kate Gosselin Friday about her breach of custody during her last visit to the View as a cohost. Kate wanted to address the latest story about Jon Gosselin boinking babysitter Stephanie Santoro and making sure that everyone knew that this was the same babysitter that caused her to go over to the house during Jon’s custody time. During that little drama, the cops were called and Kate drug her defeated possum head to a Day’s Inn to lick her wounds.

Kate says she felt compelled to show up at the residence because she was having a mother’s intuition about the babysitter. She never actually accused Jon of having sex with Santoro (he denies it), but she kept repeating her “intuition” story.

Joy kept making joking asides about Jon’s sex romp with Santoro, and then Whoopi laid the smack down on Kate’s beaver head. It was looking very sweet and wavy, so Whoopi was really attacking the equivalent of a tranquilized house cat, but that didn’t stop her. The moment of greatest tension was when Whoopi told Kate she could get arrested for showing up during Jon’s custody.

Watch the video after the jump:

Shark Tank: Are the deals for real? Can the Sharks back out?