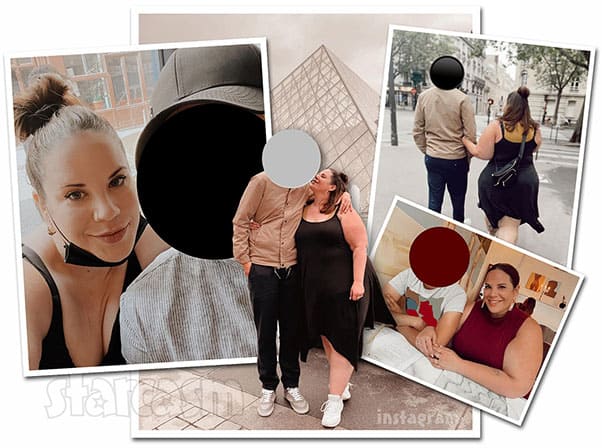 Whitney Way Thore is set to return to TLC for a new season of My Big Fat Fabulous Life on August 17, and it appears as though viewers will be seeing a familiar story: Whitney and her boyfriend in Paris!

Whitney has moved on from her disastrous relationship to Chase Severino, and she is currently with her new boo in the same city where Chase proposed to her in 2019.

“I’ve always had a sorta love/mostly hate relationship with social media, but after the last year, it’s grown even more complicated,” Whitney began a caption for an Instagram gallery of images featuring herself and her new beau. “So — when your French man says he values his privacy but you still wanna share him, this is what social media gets 😂.”

What social media gets is four photos of Whitney with her mysterie chéri:

Whitney concluded her caption with a tease for the new season. “See y’all for a new season of #MyBigFatFabLife August 17 at 9/8c on TLC,” she wrote, adding a red heart emoji.

As you will see in the comments of Whitney’s Instagram post, the big question is: Will Whitney’s new boyfriend be on the new season of the show? Given his aversion to being on social media, you would have to assume that the guy would also not want to be on a reality television show with hundreds of thousands of viewers.

Even so, I simply CANNOT imagine that Whitney would have flown to Paris and posted these photos while teasing the new season if the plans were to not include him! In addition, the network brought up the relationship in the official press release for the new season last month.

“Whitney is exploring a new relationship of her own, as an online flirtation buds with a man who lives in Paris – the two met while Whitney was taking virtual French lessons, but long distance, especially cross-continental, is never easy, so the two of them are working to figure out exactly what they have.” Is it just me or are there LOTS of reality shows trying to catch some of that 90 Day Fiance international love lightning in a bottle?

Whitney met this man while taking virtual French lessons. I wonder if they met before Whitney and Chase’s ill-fated proposal trip to Paris or after? There are lots of viewers who doubt the validity of Whitney and Chase’s entire relationship, so could it be that she was meeting up with her French tutor while there filming with Chase? Hmmmm…

Perhaps producers could just edit out his face like Whitney did in the pictures? As a seasoned reality TV viewer, I think that would be even more ridiculous and silly than excluding him altogether. Of course, producers of My Big Fat Fabulous Life has demonstrated many times in the past that they are unafraid of doing things unconventionally, so who knows what they will do?

I suppose we will all have to wait until August 17 to know for sure! There will most certainly be a preview trailer or two released before then, but there’s a very good chance Whitney’s new beau’s face will be hidden. Of course, there is an army of internet sleuths currently trying to figure out the identity of Whitney’s mystery man. If they are successful before the new season, hiding his identity on the show and/or the trailers will be relatively moot.

We will certainly be keeping an eye for more information. (I’ve already busted out my internet magnifying glass and have yet to uncover any boo clues.)

UPDATE – We have the first preview trailer! TLC not only blurs out Whitney’s French mystery man, but they also suggest that he might be a catfish? Here’s the trailer:

#MyBigFatFabLife returns on August 17! Get the scoop on what to expect this season, including Buddy moving in with @WhitneyWayThore, Babs' health concerns, and Whitney dating a new man… from France?! #MBFFL https://t.co/HDZdOJAOau pic.twitter.com/i5JgOgDMqr

Whitney Thore & fiance Chase Severino split, he got ex pregnant & will be a dad in October