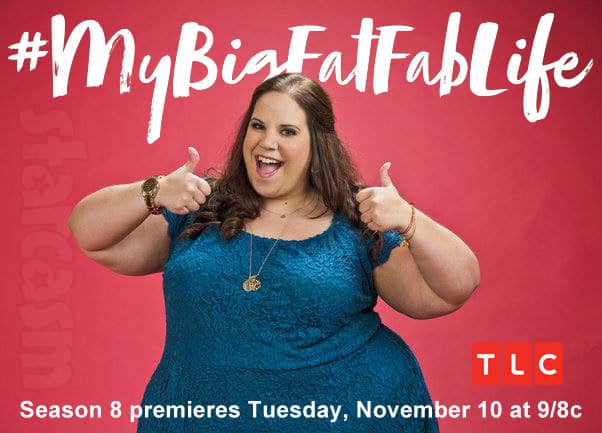 Fans of TLC’s My Big Fat Fabulous Life have been speculating for months that the show might not be back, but show star Whitney Way Thore just revealed that she and her friends (and ex-fiance?) will indeed return for another season premiering in November!

Whitney broke the news on social media last week with a series of announcement posts, beginning with a fan Q&A response in her Instagram stories. “When is MBFFL coming back?!” one follower asked.

Whitney later followed up with an Instagram post about the new season, including a photo of herself nude in a tub because Whitney…

Here’s a photo of me fake-laughing in a bathtub to accompany an announcement: Season 8 of #MyBigFatFabLife premiers Tuesday, November 10 at 9/8c 🙃

“Here’s a photo of me fake-laughing in a bathtub to accompany an announcement,” Whitney captioned the image, before adding the show return deets: “Season 8 of #MyBigFatFabLife premiers Tuesday, November 10 at 9/8c 🙃”

“Thanks everyone for the lovely moments!” Whitney continued in the comments. “It’s been rough recently for me personally, but we can’t wait to be back on your TVs! 😘”

A few days later, Whitney shared a photo with her Platonic BFF Buddy Bell along with a reminder:

@thebuddybell and I just want to make sure that y’all know we are returning for season 8 on Tuesday, November 10 at 9/8c on TLC! 😘

The new season certainly promises to have LOTS of drama! In case you missed it, Whitney and her fiance Chase Severino broke up earlier this year after he “reconnected with a woman with whom he has had a long history.” That “reconnection” was apparently quite intimate because the woman is currently pregnant with his child and due in the next couple months.

The pregnancy and break up fed into existing rumors that Whitney and Chase’s relationship was staged for the cameras.

There are multiple baby registries for Chase and the mom-to-be that list a due date of September 25. That would mean that the baby was conceived right around January 3, which was before My Big Fat Fabulous Life Season 7 aired. Whitney and Chase appeared to still be together throughout the airing of the new season, and Whitney even stated that their wedding would be included in Season 8.

In May, Whitney and Chase shared their awkward announcements that they were no longer together and that Chase was going to be a dad.

The pregnancy was first reported back in April by Instagrammer @90DayFiance_etc. The account removed the post, but shared it again after the break up announcement. Here are a couple of the statements made by the account in regards to their source and the authenticity of Whitney and Chase’s on-screen relationship:

Gentle readers – I posted this story on April 16 but took it down because my source was afraid of being found out. Well, some time has passed, rumours abound on Reddit and elsewhere and judging by the absence of Chase on Whitney’s social media, it seems to be true (allegedly 😉). I like this show but this level of fakery was so bold and reckless and insulting, I don’t think it can recover. In other words ….the f**king AUDACITY.

Here’s what bothers me; there was no need for the fraud. We were enjoying watching her dance and live her life. We knew that some of the storylines were produced but we could overlook it. But this? Well, this level of fakery is impossible to come back from. For those of you who think they just broke up organically, you’re wrong. This was a fake story that I broke mid April after getting a DM from a very reliable source. I predict this show doesn’t survive 🤷🏻‍♀️ Last season felt staged and fake and oh look…it was.

In addition to Whitney and Chase breaking up, the new season will also likely include Buddy Bell’s budding relationship with his new girlfriend, Brittany Sherman.

“I feel like this is going to be a difficult season to watch,” one fan commented, adding a broken heart emoji.

Whitney also revealed that they are still filming for the new season. After one follower complained about having to wait until November to see the new season, Whitney replied: “We haven’t even finished shooting it yet!”