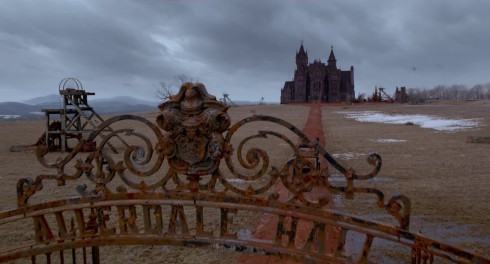 The gorgeous three-story haunted castle took seven months to build, and Guillermo oversaw every detail to make sure the place’s atmosphere colored the mood of every frame. He even bought different sizes of the same furniture to create different feelings in different seen, and coded the word “fear” into the wallpaper.

The fireplace and elevator were real, but what wasn’t part of the real house was the gaping hole in the roof. The effects from that touch were rendered with CGI.

As for the red clay pits that Crimson Peak sits on? Those don’t exactly exist in real life. Clay can’t really become a bloodlike oil that leaks through walls, but it makes for great visual effects.

What’s the deal with scary movie As Above, So Below and the catacombs of Paris?