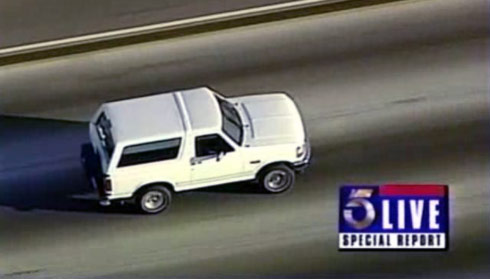 Tonight’s installment of FX’s The People v. O. J. Simpson picks up with the slow-speed white Ford Bronco chase that enthralled the nation Friday, June 17, 1994. Over 95 million people tuned in to watch O.J. cruising through L. A. in the back seat of his friend A. C. Cowling’s now infamous car. At some point, he got on the phone with a police officer who tried to talk him down from suicide. Whatever happened to Cowlings and his iconic car?

A. C., or Al Cowlings, is a childhood friend of O. J.’s who also had a professional football career. Their friendship was incredibly close, even surviving O. J. stealing, and then marrying A. C.’s high school girlfriend Marguerite Whitley. On the day he helped O. J. evade police, A. C. was supposed to be keeping O. J. under suicide watch at Robert Kardashian’s house while O. J. waited to turn himself in for the murder of his ex-wife Nicole Brown Simpson and her friend Ron Goldman. Instead, he helped O. J. slip out the back door.

Their run didn’t last long, after they were discovered missing a television broadcast alerted the public. Soon enough, someone who had just watched the announcement on TV headed out and saw​ the Bronco in traffic. Not long after that, a helicopter and swarm of police cars were trailing A. C. and O. J. while a rapt nation watched and ordered record amounts of pizza.

The police got on the phone with A. C., who let them know that he was headed to O. J.’s mansion and that The Juice was still suicidal. A SWAT team waited for the men and arrested them as soon as they arrived. Cowlings was charged with felony aiding a fugitive and was let out on $250,000 bail. He was ultimately not prosecuted due to lack of evidence, but he stayed by O. J.’s side throughout the trial. He even set up a 900 number called (900) CALL 4 AC that charged $2.99 a minute to hear recorded messages from A. C. about the trial. He said this was a better alternative than speaking to the press because they, “consistently sensationalized the facts and negatively exploited the many aspects of this tragedy.” He reportedly told Nicole’s sister Denise Brown’s lawyer Gloria Allred that the proceeds from this venture would go into a fund for Nicole’s children.

Since O. J. was acquitted of the murders, A. C.’s kept a low profile, but he’s recently spoken out about his fears that his character in the series (played by Malcolm-Jamal Warner) will paint him badly. His rap told TMZ that Cowlings despises the media. Cowlings last public sighting was in 2007, and the last report about what he was up to was in 2012 when Fox News says their journalists found out he was a handbag salesman facing bankruptcy.

The Bronco is still making appearances, however. After O. J. Simpson was found liable for the deaths of Ron and Nicole in a 1997 civil trial, Cowlings sold the Bronco to collector Michael Pulwer for $75,000, twice its original value. Since then, its been rented out, most notably appearing in 2012 on display at the Luxor in Las Vegas.

Is there a Kris Jenner sex tape from the ’80s?