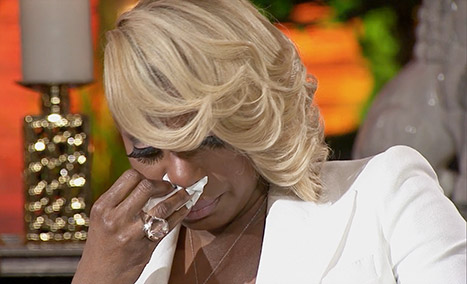 On tonight’s final Real Housewives of Atlanta reunion, Nene Leakes ends up breaking down and walking off set. What caused this meltdown?

“NeNe, I think that you think we’re all against you. We have our fights, we have our arguments, things are said,” Kenya more Moore said. “You feel like we don’t like you; we don’t love you. But we don’t want to be at that same place with you. We want to move on.”

We have a lot more in common than you’d like to even admit,” Kenya continued. “You don’t have a relationship with your mother … you felt abandoned.”

“I can’t talk about my mom,” Nene replied as she burst into tears, and had to walk off stage where she was comforted by therapist Dr. Jeff.

Nene was born Linnethia Monique Johnson, and was raised by her aunt in Athens, Georgia. She wrote a bit about her upbringing in a 2009 memoir Never Make the Same Mistake Twice. The memoir didn’t delve too deeply into issues with her mom, but they did have a strained and distance relationship. In the book she also wrote about getting pregnant young and doing what she had to do to survive and build a good life for her son. It’s this fierce drive that’s help propel Nene to the top of the reality star totem pole, and even helped her get acting work on network sitcoms and Broadway.

Nene has recently expressed doubt that she will return for another season of the drama filled RHOA, and says she’s currently working on “a really big deal with Kim Kardashian.” Although she says she can’t reveal what it is, she says she’s signed something “interesting,” that will go on for the next couple of years. Maybe Nene’s developing her own game app with the help of Kardashian.

Real Housewives of Atlanta reunion airs Sunday, May 10 at 8 ET on Bravo.