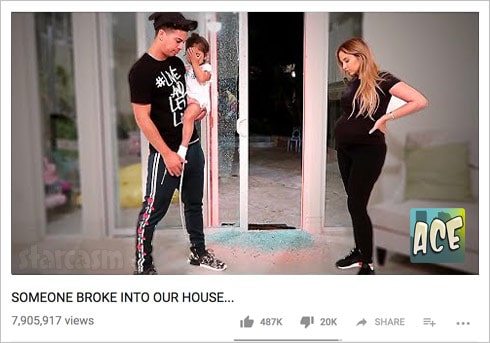 Now Internet sleuths, YouTube drama channels and Instagram accounts claim that the family staged the break-in for YouTube and a receipt surfaced that seems to indicate the family paid a group of cop actors to film a video with them on Thursday. Starcasm has obtained evidence to suggest that the family probably was burglarized, but on a the 15th, not the 16th!

According to the official Crime Mapping service provided by the Los Angeles Police Department, there was a burglary reported on the same block as the ACE Family home on Thursday, August 15 at approximately 2:00PM. The official Incident# for the burglary is 182114884. Unfortunately, we cannot confirm the specific address of burglary because the LAPD Crime Mapping service puts their records “through an exclusive data scrubbing process that works to locate each crime incident geographically, to a hundred block.” The burglary on August 15 was the only recent burglary that we could find on that block. There was another burglary reported just down the road (about a half mile away) later that afternoon, however. 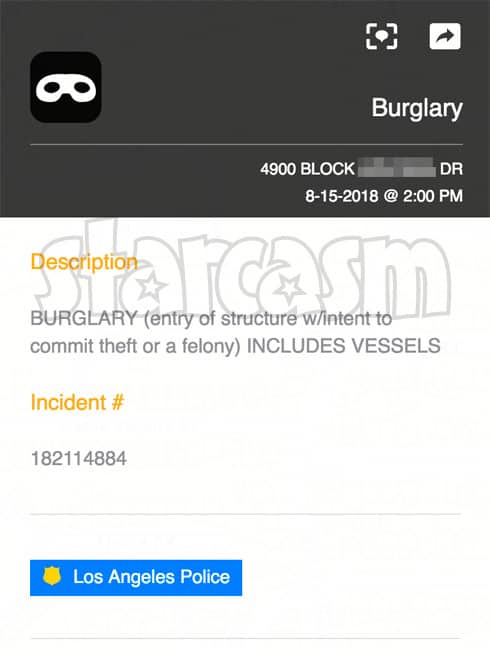 UPDATE – Keemstar has since posted what he claims to be the actual police incident report from the burglary. That report also lists August 15 as the break in date, but the incident number doesn’t match up to the one from the LAPD crime map data that we found:

I now have the actual police report. The Ace family did NOT fake the robbery. Case closed. Also no one is paying me crusty lips! pic.twitter.com/z5SOuHMa4O

Below is a tweet from the 16th from Austin McBroom saying they were robbed that night, not the 15th.

Catharine Paiz responses to allegations that they staged the break-in via Twitter where she addresses the mass amount of speculation and stories surrounding their burglary. She says these speculations not only attack their family, but the LAPD and explains that they uploaded the video to “share how serious the invasion of privacy is around us and our home.”

In the family’s video about their break-in, which is embedded below, Austin shows four cop cars, relates that the family came back from Disney to a dark house. He says he heard glass falling and saw the the back glass door was shattered. He then shows several of the cops, one of which asks if he’s recording for YouTube and then says “cool” and makes a hand signal for the camera. This is one of the behaviors exhibited by the police that seems suspicious to viewers. 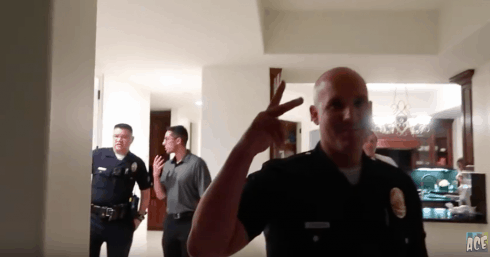 The burglars took a number of Catherine’s handbags, but did not touch most of the expensive items the family owned. A tablet, a wallet, tons of high-end clothes and shoes, a YouTube Play button, and many other possessions were left untouched. Mail was strewn in the walkway outside, and a knife was found upstairs. The officer asks Austin on camera if he can take the knife for evidence.

In a video uploaded by another party below, Austin McBroom shares video of the fingerprinting cop via Instagram Live. Something odd about this is that he does not show the cop, but instead films the ceiling and odd angles because he says he would not film a member of the LAPD. He then follows up with “without their permission,” because of course he did film members of the LAPD for the video about the burglary (If indeed those were real officers and not paid actors.)

YouTube drama Instagram @YouTubeShadeRooms posted some “receipts” supporting the theory that the family staged the break-in, in this case a literal receipt obtained by a fan of the channel @xsadiealyssax, who is said to have posed as the family’s financial advisor in order to ask a cop actor rental company to supply a receipt for supplying cops and cars for Austin McBroom on 8/16/2018, the date Austin said the incident occurred, and the date the video was posted on YouTube. The company, Top Cop Shop LA, supposedly came through with a receipt. The receipt has the name Top Cop Shop LA, and the phone number listed belongs to a company that is called Cop Shop LA. 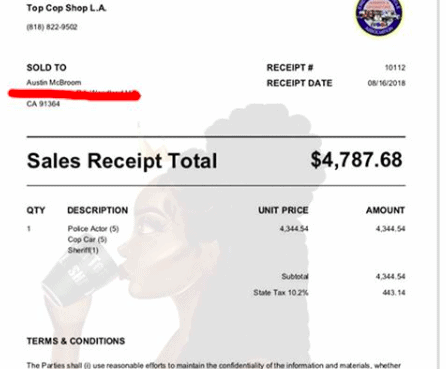 UPDATE – I just want to point out that if the burglary actually happened on the afternoon of August 15, then all of the evidence suggesting that the ACE Family staged the video on the 16th could still be valid. The narrative would then be that there was a break in on the 15th and when the family found out, the result wasn’t a marketable video they could post on YouTube. So, they arranged for a reenactment (much like many reality shows) of their discovery the following night, complete with rented cops and police vehicles. The family took an impromptu trip to Disneyland, only to “discover” the break in (with their camera rolling) when they got home that night. I am not saying that is what happened, I am merely putting that out there as a theory that would explain all of the anomalies uncovered by online sleuths.

YouTuber Trisha Paytas even weighed into the situation on Instagram live, and she believes the situation is staged. “Who the f*ck poses for a thumbnail if their house actually got broken into,” Trisha asks while looking at the family’s YouTube channel. That may be a valid question, but it in no way proves that the burglary didn’t happen.

BEFORE THE 90 DAYS Trisha Paytas woos Sojaboy, Baby Girl Lisa is NOT HAPPY

Three more women accuse Bill Cosby; one was 15 at the time