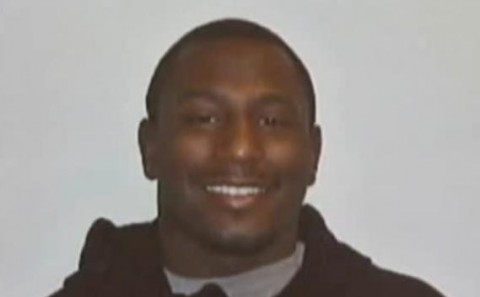 Kim “Kemp” Luchie (seen above) was tragically gunned down in what investigators are fearing is a case of mistaken identity.  Luchie, 25, was at a popular local hang out, The Cabin, near the campus of Central Michigan University in Mt. Pleasant, Michigan when Justin Joel Lockhardt, 32, of Shephard, Michigan entered the establishment and shot him multiple times before fleeing the scene.  Lockhardt had been to The Cabin two times previously that evening.  In one of these visits he is believed to have taken a photo of the victim with his cell phone. 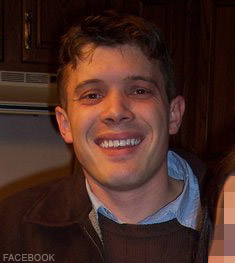 Police were already in the vicinity because Luckhardt, 32, (seen in the above photo) had crashed into a stop sign prior to the shooting.  Following the homicide he was pursued by police until he lost control and wrecked his automobile at an intersection.  When police approached, they discovered Luckhardt laying next to his vehicle with a self-inflicted gunshot wound. A Glock semi-automatic .357 handgun, ammunition as well as a Kevlar bulletproof vest were found in his car.  The handgun is believed to be the murder weapon.

Luchie and Luckhardt were both pronounced dead at a local hospital.

Further amplifying the tragedy of this event is that investigators suspect Luckhardt mistook Luchie for someone else.  Police believe Luckhardt was in the midst of marital problems. Luchie was sitting with Luckhardt’s sister-in-law at the restaurant-bar The Cabin.    Mount Pleasant Police Chief Anthony B. Gomez-Mesquita said:

“The sequence of events, while pre-meditated, were not planned well in advance.”

“We do not have any information at this time that the suspect and the victim knew one another.  We do know the suspect was having marital problems and that at The Cabin bar, within one of the booths were four individuals. These four individuals were friends and work associates. One of the females at the table was the suspect’s sister-in-law.”

A candlelight vigil was held in the parking lot of The Cabin on Wednesday night for Luchie.  There was prayer and testimonials from friends of Kemp.  “You always knew there was no negativity coming from Kemp,” said Drew Grayson. “You were only going to see positive from him.”

Grayson and girlfriend Jonai Washington teamed up with the director of Minority Student Services for support of the event. Washington stated:

“It didn’t take long to plan (the vigil). The Cabin owners were more than happy to allow us to use the parking lot. We contacted everyone we could think of. If anyone deserves it, it was Kemp. He was a sweet person.”

Luchie was a stand-out athlete who, for a brief period of time, was a member of the CMU football team.

Half-Ton Killer? Why 1,100lb Mayra Rosales confessed to a murder she didn’t commit