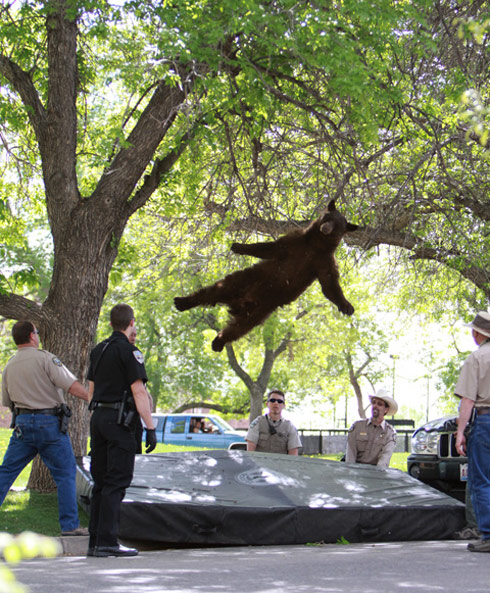 Authorities were called in around 8:00 AM yesterday to do something about a bear of a situation according to the CU Independent student-run newspaper. The bear you see above climbed up a tree near the CU Boulder campus. Wildlife officials were contacted and were able to successfully tranquilize the animal. The amazing photo you see is the bear falling after being sedated.

The landing pad is actually mats that were provided by a nearby recreation center. The mid-air bear was then caged and will be transported to a higher and safer elevation. The animal is between 1 to 3 years old and weighed an estimated 150 to 200 lbs at the time of its flight.

The amazing photo you see above was taken by Andy Duann for the CU Independent. Give that dude a job somebody.

Woman arrested for cancer scam while in route to appear on Dr. Phil

VIDEO This cop accepting a dance-off is funking amazing!