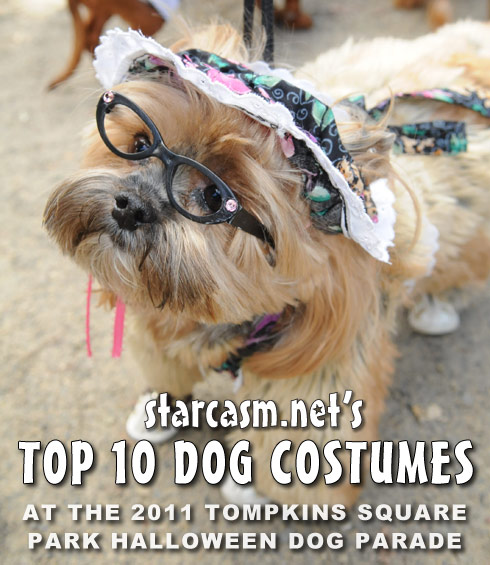 Every year hundreds of peeps and pooches gather together in Tompkins Square Park in New York City with their furry four-footed friends dressed to the ca-nines in their Halloween best for the annual Halloween Dog Parade. This year featured a fine field of five hundred or so entrants with Howl-oween looks that ranged from a rat-infested subway car to Lady Gaga.

Thanks to the diligent work of the pup-arazzi over at WENN we have access to a number of the costumes on display, and from those I have compiled my top ten favorites, with a name and brief description for each. 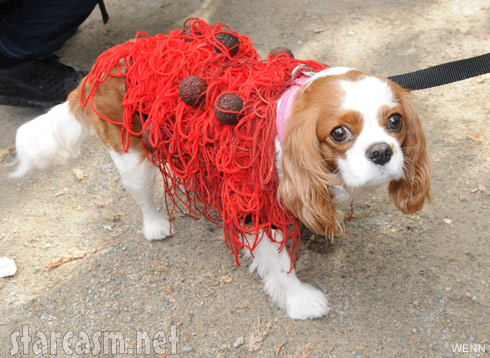 I’m not necessarily a huge fan of the costume (I think it needs some yellow yarn around the edges to make it complete) but I absolutely LOVE the sad look on that pasta pup’s pitiful puss! Somebody get that Lady a Tramp already! 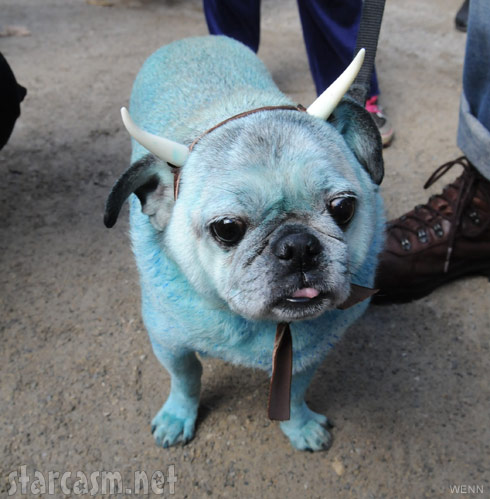 This little blue feller might not of made the list on just his tinted good looks and horns, but he was accompanied by some decked out Paul Bunyan themed human accessories that helped nudge him into the Top Ten: 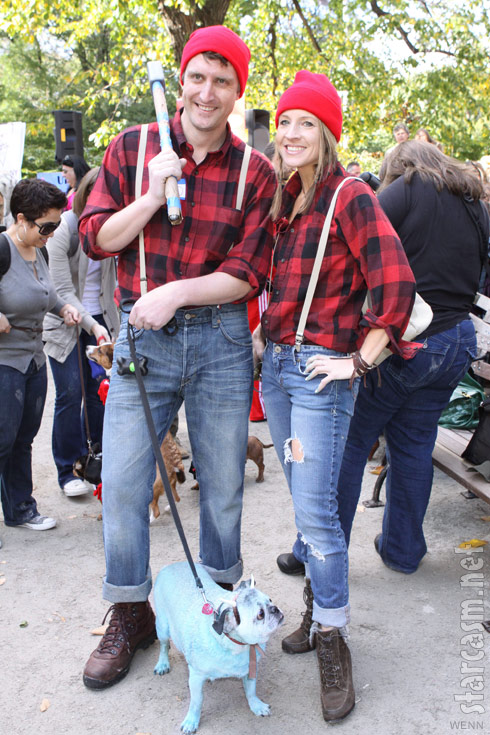 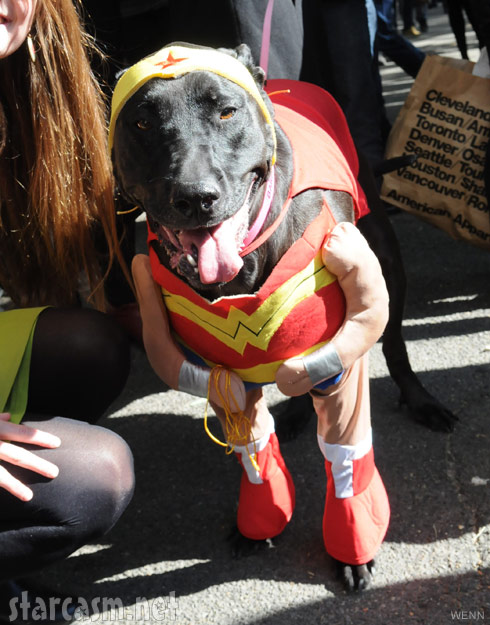 Wonder Woman doesn’t seem to be aging well at all! Oh, and look – the costume comes complete with a leash of truth! 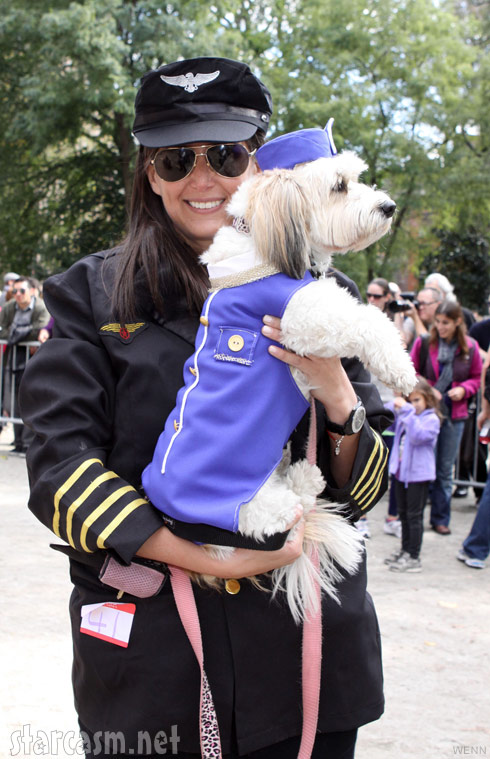 Cashing in on the retro fervor generated by the new Christina Ricci series Pan Am on ABC is this little pooch. I’m sure her owner had her fingers crossed that the show wouldn’t get canceled before the parade and contrary to the predictions of numerous critics, she made it! (Those same critics will more than likely jump on my inability to come up with a clever canine play on words for Pan Am Stewardess) 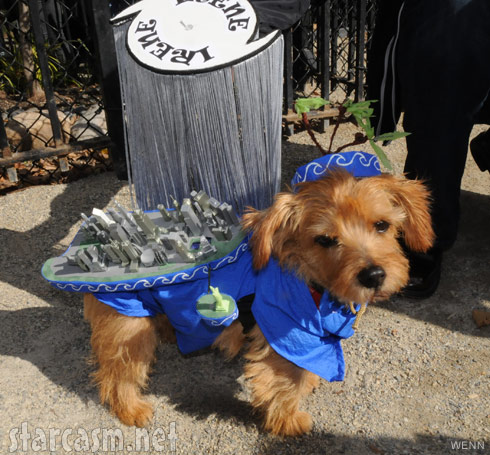 This gal wins the high concept award hands down! In addition to the miniature New York City there’s even a little Liberty Island with a little Statue of Liberty! One odd thing though – I don’t really remember Hurricane Irene being quite so damn cute. 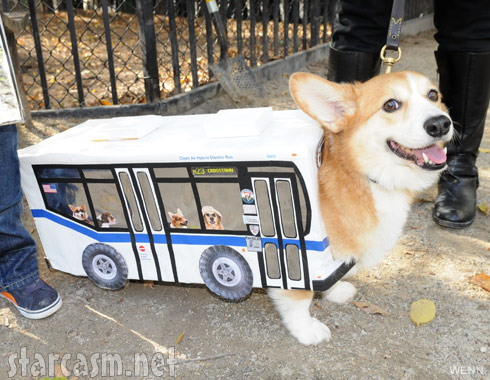 This little metro bus Corgy costume gets lots of kudos for the elaborate detailing! Check out the happy little pooches in the windows heading downtown to punch the clock at their canine to five jobs. Oh, and in case you were wondering where this Corgy stops, he comes complete with a walking bus stop and schedule! (And if you look closely I think you’ll see the same little boy wearing a fireman hat taking a joy ride in the front seat!) 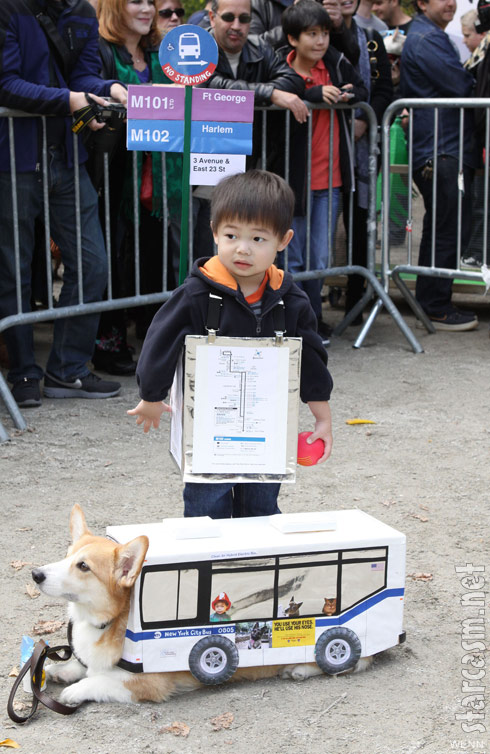 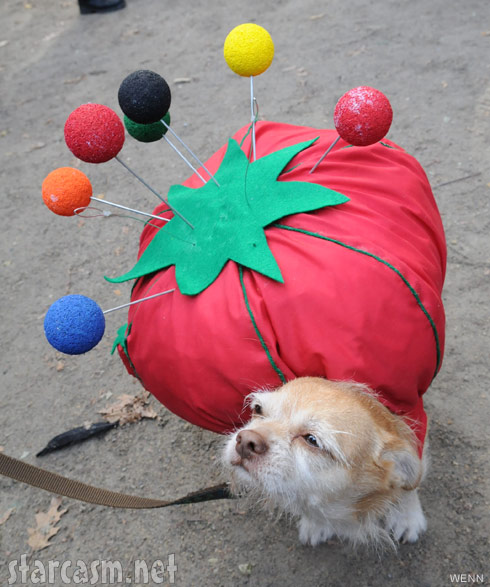 I like the tomato pin cushion idea, but the real selling point here is the dog’s face! That is a grizzled pup right there who looks to have withstood many a prod and poke from his eldery sewing master! Sadly, this costume also featured a thimble helmet for the little guy but he wasn’t wearing it in this picture. (OK, OK, so I had to use a Rin Tin Tin reference for the second time. There are only so many dog-themed plays on words you can make!) 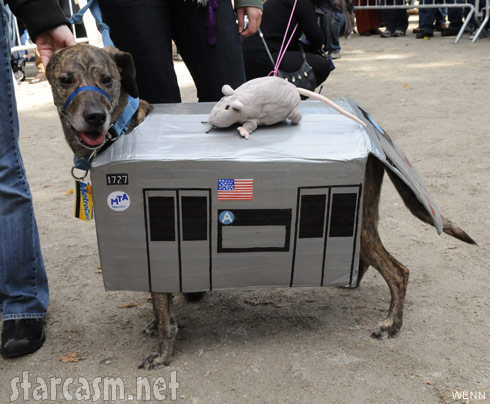 What’s the most valuable lesson in costumegery? Accessorize, accessorize, accessorize! All it took was the addition of a little rat to elevate this NYC Subway costume to the level of social commentary! (I’m not sure what breed of dog that is, but with a costume made out of those materials it should be a boxer. Hi yoooo!) 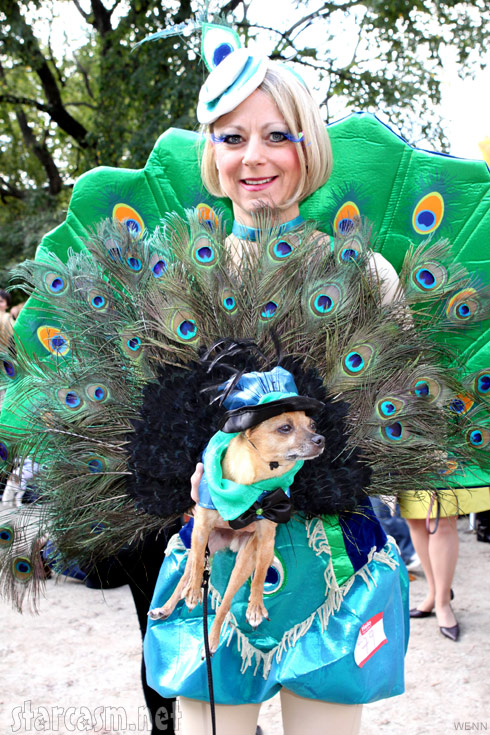 I think we have our winner in the Human Companion Costume contest! Wowza! (Please tell me she’s wearing a shirt) But, as decked out at as Flannery Cujo’Connor is, she did save the real peacock feathers for the dog, so it’s clear she understands who this parade is really for. Something tells me photos don’t do this costume justice and that seeing it in action, with those big tail feathers running about, might actually elevate it to number one. 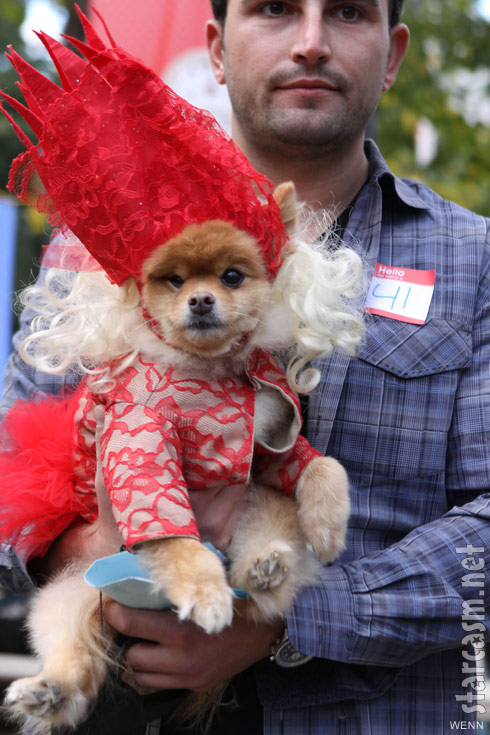 Now here’s a little monster that keeps up with the times! This Pomeranian fashionista was all decked out in Lady Gaga’s infamous red lace outfit from the 2009 MTV Video Music Awards. Being a pop culture blog we have to tip our hat to the hip factor of this look and give it our top honor! C’mon, everybody sing… Puppy-puppy-Puppyrazzi! 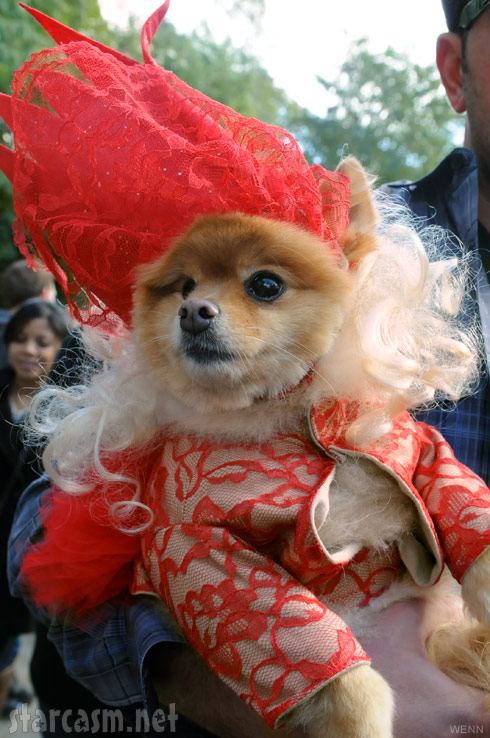 You can see more great costumes from the parade (some of which would have made our list if we had access to the images) HERE and HERE!

All other photos: IZZY