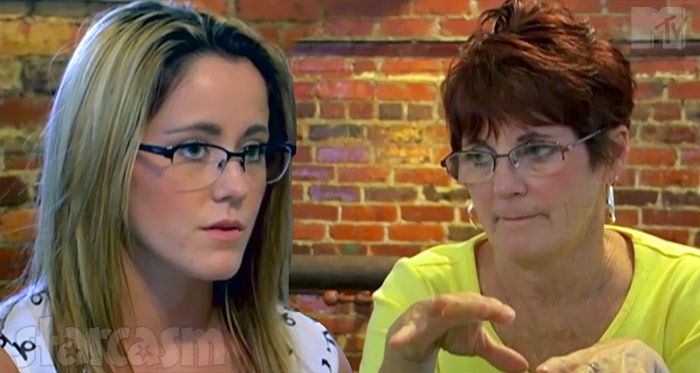 We have a brand new batch of Teen Mom 2 preview clips for this week’s episode. Entitled “Expect A Miracle,” the episode promises money problems, a significant other moving in, a second attempt at a rehab trip, and of course, Babs.

Here are the clips for each of the moms:

In last week’s episode, Leah Messer bailed on her planned trip to rehab/therapy after some confusion over her ability to see her daughters for Mother’s Day. So, in this week’s preview clip, we see her heading back again. Leah says goodbye to her daughters, and Aleeah takes the news particularly hard. Leah walks out the door to a cacophony of screams.

Kailyn, Javi and Jo meet at a picnic table to discuss the amount of child support Jo is providing. “I just wanted to kind of just give you some time to think about just increasing your payment,” Kail says, “and I don’t even know how that would even happen without going through court. Your child support doesn’t even make a dent in his school tuition.”

“No,” Kail says. “And now, with his activities, his health insurance, and his dental insurance…”

“So, what are we talking about, here?” asks Jo.

Kail responds quickly. “I’m just trying to figure out what we’re going to do, because you don’t want me to take you to court, but we clearly can’t come to an agreement.”

“Right,” says Kail, “but we’re already arguing about it.” (The camera shows Javi, who silently smiles.)

“We’re not arguing,” Jo points out.

“What do you suggest that we do then?”

“You have to tell me what you need,” Jo says. “What are you spending? What do you need from me?”

“What is going to happen from there?” replies Kail.

“Then we’ll sit down with the actual numbers and we’ll talk about what I can do and what I can’t do.”

The two then debate about whether it is wiser to reach an agreement out of court, or let the court decide. Javi finally speaks up and says he thinks they should just let the courts handle it. Jo seems surprised. “Wow. I guess you wouldn’t understand unless you are actually in the situation.”

Jenelle and her mom Barbara, along with Kaiser and Jace, meet at a restaurant to talk over the possibility of coming to some sort of custody agreement with Jace without having to go to court. “I don’t think we’re ever going to come to a resolution about Jace,” Jenelle says.

Babs seems more optimistic. “I want to come to an agreement before we go to court because I think court would be devastating,” she says. “We need to start writing something down, either between us or something, or come to an agreement between both of us about Jace visiting. So, you know, we don’t have to, per se, go in front of the judge, because it might not be the answer you want to hear. You’ve got to be willing to give and take.”

“You too,” Jenelle says.

Barbara continues, “You’ve got to be not taking it all.”

“You too,” is Jenelle’s response again.

Meanwhile, there is a mysterious subplot in the clip involving Jace. Early on, he is given permission to go to the bathroom by himself, so he heads downstairs (where I assume the restroom is located). Later, after returning, Jace declares, “I need to go poop.” Jenelle seems surprised. “I thought you just went?” she asks. “I didn’t,” says Jace before heading back downstairs. So what in the world was he doing down there the first time?!

The happiness continues for Chelsea as her Prince Charming Cole DeBoer plans to move in with her and Aubree earlier than expected. While swinging on a swing set with her friend Callie, Chelsea reveals, “I think the thing I’m looking forward to most about Cole moving in is just, dude, I wanted a family since I had Aubree. I tried to make it with Adam for so long, you know? But it wasn’t it.” She adds, “I feel like it’s all coming together. And I’m glad I went through everything, so I can really appreciate it now.”

But even fairy tale endings have some issues. “I don’t know what to do about the whole, like, how [Aubree] wants to call him ‘dad,'” Chelsea says.

So, will Aubree be calling Cole dad? Does Jace ever actually take a poop? Does Leah ever actually make it to therapy? Will we get to see even more of Javi in a tank top? Tune in to the brand new episode of Teen Mom 2 on Thursday night at 10/9c on MTV to find out!