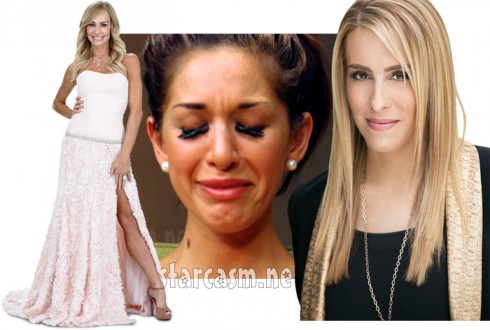 First, let me point out that this post has one of the densest and most meta pop culture headline ever, which I suppose is likely to happen when multiple headline-garnering celebs and their significant others (or not-so-significant in the case of Farrah Abraham) move in together and receive couples therapy in front of reality show cameras.

In case you missed it, all but three or four people on the planet are convinced that former Teen Mom star Farrah Abraham asked DJ Brian Dawe to pretend to be her boyfriend so she could appear on VH1’s Couples Therapy — a stunt she reportedly tried the year before with another fake boyfriend that fell through, causing producers of the show to go with Farrah’s Teen Mom co-stars Catelynn Lowell and Tyler Baltierra instead. Brian agreed to go along, but bailed at the last minute, at which point he informed producers of the show (Read the email here) that the relationship was a sham. Brian then says he was offered additional money if he would appear. He refused.

Dr. Jenn Berman, the host and resident therapist on Couples Therapy, then decided to allow Farrah Abraham to stay in the house, believing that she could still benefit from therapy. (Dr. Jenn has continued to say that she believes Farrah’s relationship with Dawe was legitimate, thus making her one of the three or four people — a list that includes Farrah — who believe Farrah’s side of the story, or at least act like they believe it.) 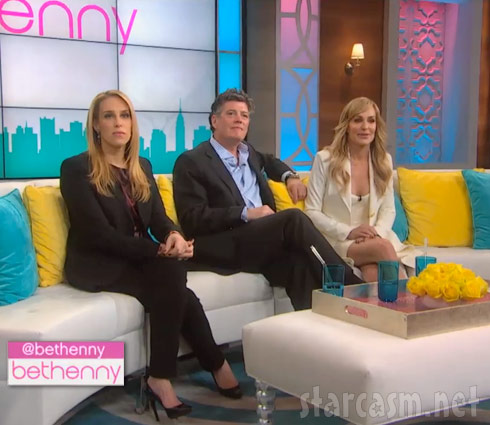 Dr. Jenn and Farrah’s Couples Therapy co-star Taylor Armstrong, who had a major drunken confrontation with Farrah (and the people in charge of the Couples Therapy house HVAC system) on last week’s episode, appeared on Bethenny Frankel’s talk show Bethenny today, and of course the topic of Farrah came up. (You might recall that Bethenny had Farrah on her show not too long ago, and as you might have guessed, Bethenny didn’t kiss Farrah’s ego and it did not go well. At all.)

ANYWAYS….. Here are videos of Dr. Jenn and Taylor Armstrong (and Taylor’s fiancé John Bluher) on Bethenny talking about Farrah’s appearance on Couples Therapy, the legitimacy of her relationship with Brian Dawe, and Farrah’s sex tape with James Deen, who is yet another guy Farrah apparently tried to convince to pretend to be her boyfriend as part of a scheme to market her “sex tape” as something personal that was “leaked” to the media.

BETHENNY Farrah Abraham, who was on this show, who is very controversial, and that show itself, here, was a very controversial show, she — we just saw a clip of her. So she’s there, and her boyfriend didn’t show up. There’s been a lot online saying that it wasn’t really her boyfriend, that is was kind of a ploy — that she wanted to have somebody with her to be able to be on the show, to be able to be on television

TAYLOR I don’t about whether that relationship was a sham. There’s a lot of things that Farrah said and did during our time together that I think were untrue, and I just had a very bad vibe that a lot of the things… and John felt the same —

At this point Bethenny shared a tweet from Brian Dawe putting down the show.

BETHENNY So he didn’t show up, she’s crying. I guess VH1 let her stay and do her own show.

Dr. JENN I let her stay.

BETHENNY You let her stay. OK.

Dr. JENN It’s my treatment center. I make the decisions.

BETHENNY And Taylor, what was it that you thought was untrue? That Farrah did that was untrue, or deceptive, or — while you were there?

TAYLOR Well, when I first met her I didn’t know anything about her. I knew nothing about her past. I didn’t know about the sex tape or any of these things … So I just saw her as — when she started talking, I thought this is a girl who gravitates toward men to fulfill something in her that’s missing. And that was a pattern that I had as a young girl. And that would lead me right down the road into an unhealthy relationship time and time again, and I could see some of those traits in her. So I really invested myself in talking with her and trying to be, like, “Don’t be me! Don’t end up like me! Don’t do this, don’t do that.” And I was trying to mentor her in some ways. And then when all this “sex tape” and, just, like, lies started to surface, I felt really betrayed, because I thought I could be spending my time here in this house working with people shoe really want to get therapy.

BETHENNY She lied about the sex tape? What do you mean? I don’t understand.

TAYLOR Well I didn’t know that the sex tape existed. And then she told a story about her having this sex tape, and to me a sex tape is when someone films with you having sex without your knowledge and then releases it on the internet. It happens and I feel horrible for anyone that would be subjected to that. And we know people who that’s happened to, and it’s life changing. And then I slowly found out that the thing has a plot, and a beginning and a middle and an end, and that, to me —

TAYLOR Well, I’m like, wait a minute, when there’s multiple camera angles and she’s looking into the lens taking her clothes off, I’m, like, “I thought a sex tape was when somebody had night vision and then takes you, and then sells it on the internet.

Dr. JENN It’s also when someone knowingly makes a tape with their boyfriend and then…

BETHENNY How do you feel being compared to Farrah Abraham, Taylor?

TAYLOR Well, now, knowing what I know now, I guess it’s an insult. But I can see, and I tried in the beginning, as I mentioned. She has a tendency to need guys to validate her and that was something — I’ve had insecurity issues my whole life and I always had to have a boyfriend. I was just that girl that had monogamous, long-term relationships, like, starting in sixth grade. And the minute we would break up that was it, because this was the guy I was definitely going to marry. You know, very attached to men. And she has that tendency. And that is one thing that I think that is similar, and I tried to talk to her about, but everything else? I don’t even know who she is at the end of the whole thing.

REPORT Farrah Abraham will be returning for Teen Mom reboot