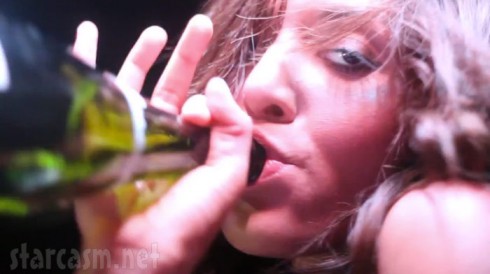 Farrah Abraham entered a 10-day outpatient program at a high-end rehabilitation center in Florida last Monday. According to a recent report, the 22-year-old was so disruptive during her time there that she was asked to leave early.

A source told Radar that, “She will still graduate from the program, but in less time than it typically takes because her behavior became challenging.” Among the issues that were said to have surfaced during Farrah’s brief stay while seeking help for alcohol abuse:

• She got into an argument with a nurse…

• She tried to take a photo of Tan Mom (who shares the same PR rep as Farrah and was also in the clinic at the time). Krentcil was said to have suffered a seizure during her stay at Lukens and was taken to a hospital where she was initially reported by TMZ to have needed to stay for days. “Surprisingly,” she was back to her Tan Mom self within a couple of hours and was good enough to leave the hospital and return to rehab.

According to the source, Farrah was asked to leave but she begged to stay and was given a reprieve by the staff.

“Lukens was reluctant but offered her a second chance. The staff didn’t throw her out then because they wanted her to get the treatment that she needs.”

This second chance didn’t last very long as Farrah was said to have invited a paparazzi photographer to the clinic to take photos of herself. The photographer was escorted from the grounds and Farrah was asked to leave Monday, two days before she was supposed to have finished the course.

When it was first announced that Farrah was doing this it all kind of seemed like yet another publicity grab. The fact that Tan Mom was there making her own headlines (the two just so happened to both be taking topless pics out in Malibu at the same time a couple of weeks ago), that Farrah was sending out tweets about the program, that it was announced during all of this that her restaurant she plans on opening would be alcohol free and that she still was said to have graduated the program only seems to back that notion.

If this was just another shot at grabbing headlines for Abraham, it would be a shame because other guests at the facility are there genuinely seeking assistance and Abraham’s presence couldn’t have helped.