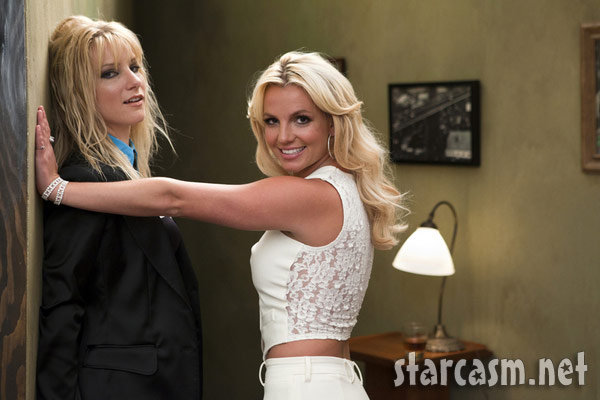 TMZ is reporting that Britney Spears was replaced by her dancing-double Allison Kyler for her highly anticipated upcoming music video for the single “Hold It Against Me.”  A rep with Britney’s camp is patently denying the rumors:

“The accusations could not be further from the truth.  Britney worked extremely hard on this video and rehearsed for six weeks prior to shooting.  Brit and Jonas got along great, and “Fans will immediately see how inaccurate these claims are once they see the video.”

Whether the accusations are true or not will come out in the wash when the video airs but what I found interesting was this mystery dance-double that TMZ sighted as the fill-in Britney.  A quick search turned up one seriously H-O-T young lady with an impressive resume and history in burlesque dancing.  Here’s a bio write up via Kyler’s official MySpace page:

Allison Kyler is at the forefront of young Hollywood. Once the lead singer of “RED DICE,” Allison is now excelling in her solo rock/pop career.This girl is larger than life and commands the stage the second she steps onto it. Starting her career starring on Broadway Tours such as “Gypsy”, “Annie” and “Godspell” soon lead to a starring role on Nickelodeon’s “Snick House” at the age of 14. This gave Allison a pretty good idea on what she was going to do with the rest of her life. Not only is she a singer but a extremly recognized dancer. Allison is most known for being the Cingular/ITUNES and IPOD girl, and from the blockbusters “You Got Served”, “The Hot Chick”, “Coach Carter” and “The Date Movie”. After all of that, Allison said “Recording my latest demo has been the greatest success of my life”. Allison worked with producers Ron Harris (Christina Aguilera, Stacey Oricco, Christina Millian) Anthony Mazza (JaRule, Jonna, Ashanti) and Adam Rayner (Fan 3, Bring it On yet Again Soundtrack) to create the perfect sound she was looking for. But she isnt going to settle there. Allison is out to make it to the top and kick ass on the way. In one of her latest songs “Hollywood” Allison say’s “I’m shallow, low and fake, I’ll never be a saint. I’m just a girl living in Hollywood”.

Yes that’s right, she’s also an aspiring singer of course.  But this situation focuses on our girl’s dance grooves so here are a couple of videos of Allison steaming it up burlesque style:

And here’s one more video, this time Miss Kyler is doing her thing at the Roosevelt in Hollywood:

According to her IMDB page Allison has been featured on episodes of Live Nude Comedy, Date Movie, You Got Served and Six Feet Under among others.  Here’s a photo of Britney’s super fine fill-in that she posted to her MySpace page:

Oh heck, lets check out one more while we’re at it:

I hope Britney doesn’t “Hold It Against Me” when I say that if it is indeed Allison Kyler who will be shaking her money maker on the upcoming video that would be just F-I-N-E.