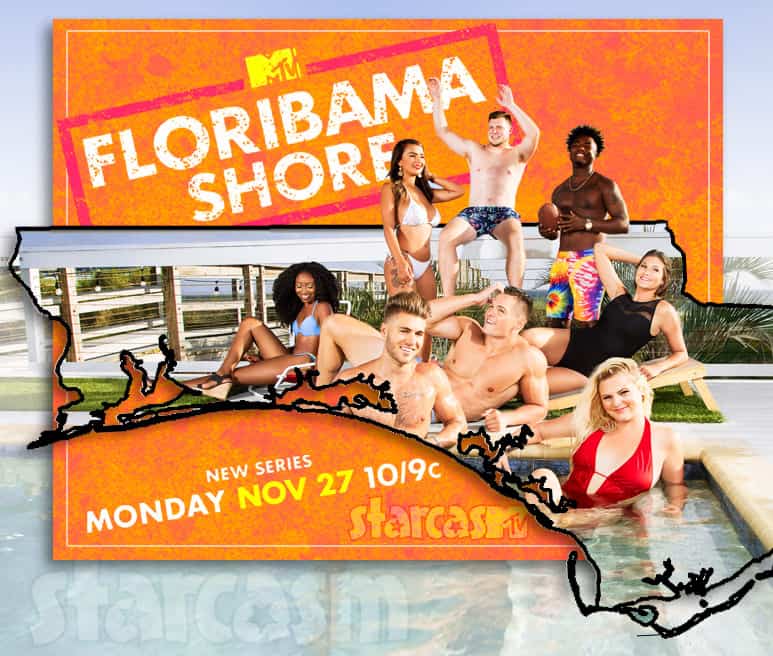 MTV captured reality television lightning in a bottle with the pop culture phenomenon Jersey Shore. Now, the network is hoping to do it again by relocating to the South’s spring break capital, Panama City, Florida, for the new reality show Floribama Shore premiering November 27.

Floribama Shore is from the same producers as Jersey Shore and is an official member of an ever-expanding international “…Shore” franchise that includes Geordie Shore in the UK, Gandia Shore in Spain, Warsaw Shore in Poland and Acapulco Shore in Mexico.

In case you were unaware, Panama City is located in the panhandle of Florida, and is often thought of as South Alabama as opposed to Florida. I spent most of my youth near Panama City (in the same small town as cast member Kortni Gilson), and I don’t ever recall hearing the term Floribama. It was always The Redneck Riviera, but I guess that title would have been a bit too controversial, even for an inherently controversial “Shore” show.

Anyways, here are the first two promotional videos for Floribama Shore, which both rely heavily on its older Garden State sibling:

Set in the Florida Panhandle along the beach that stretches all the way to Alabama, Floribama Shore is the story of eight young adults who come to spend the summer in the hottest beach town on the Gulf Coast, Panama City Beach, to party it up and put the real world on hold for just a little bit longer. But each is armed with incredible life experiences and standing at a crossroads, whether it’s ending a relationship, tasting independence for the first time, or trying to escape the past. This coming of age story captures the very real thrill and angst of being young and trying to figure out the future with a group of people you’ll come to call family.

The show is the quintessential new MTV show in that it combines two of their three biggest programming priorities over the past year:

• Something MTV has done before and had success with

In addition to the preview trailer, MTV has also released names and information for the cast members. I did some online sleuthing expecting to find a few skeletons in the form of arrests or whatever, but the cast seems to be squeaky clean for the most part. I did find a few interesting tidbits, though:

Nilsa Prowant is/was married! According to online records, Nilsa married a man named James Anderson in August of 2015. I don’t know if she is still married, but I’m guessing maybe she recently split from her husband and she is the one described as “standing at a crossroads…ending a relationship” in the press release. (Also, the couple announced they were expecting a baby to arrive in February of 2016.) Here’s a wedding photo of Nilsa and her military husband: 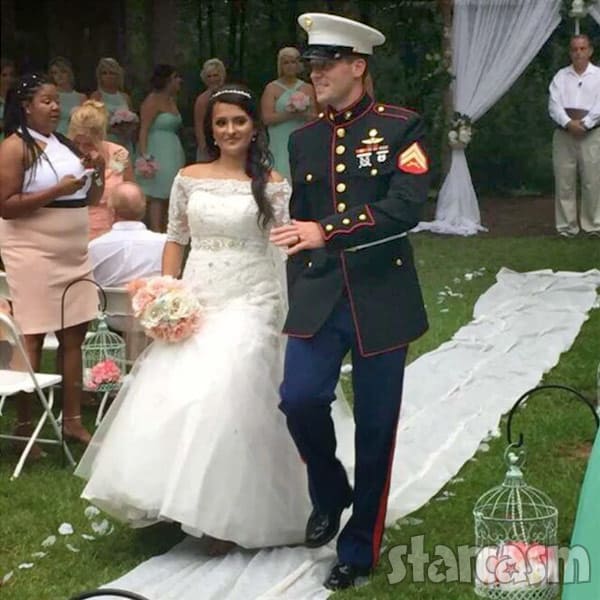 * UPDATE – Duh! MTV points out in Nilsa’s bio (below) that she has already been married and divorced.

Kirk Medas seems to have quite the history of partying! Someone with his name and the same age in the same hometown was charged with being a minor in the possession of alcohol in 2010 when he was 18. The charge came after police raided a “wild party” being attended by “approximately 50” youths — including one young man who was unresponsive and needed an ambulance. Also, Kirk was previously recognized by MTV’s Viacom sister network VH1 back in 2014 when his #makeuptransformation into Kevin Hart was featured on VH1.com: 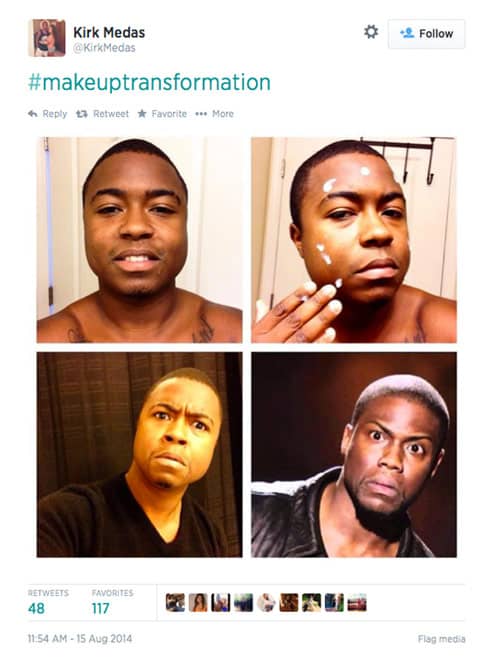 Speaking of being previously recognized by a Viacom network, Candace Rice’s rather extensive resume includes an appearance on Fear Factor in which she ate a huge bug looking thing: 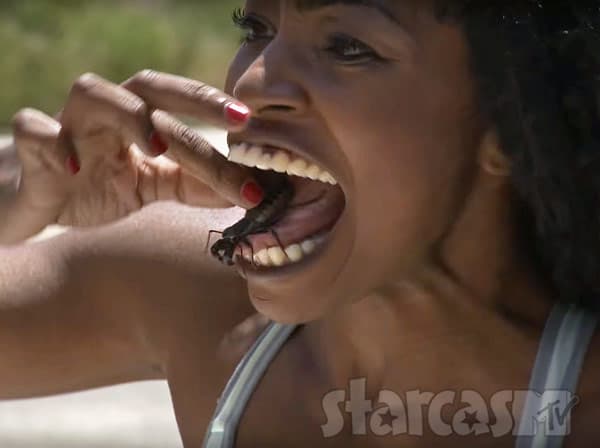 Beyond her Fear Factor appearance, Candace has had quite a few on-camera gigs, including being host of the So You Think You Can Dance and The Real World After Shows for AfterBuzz TV. Here’s her bio from them:

Candace aka PimpfriedRice, originally a native of Memphis, TN merges her southern values, grand personality, and sly sense of humor with a passion for delivering content, informing her audience, and encouraging women empowerment. Candace began her career in Memphis, TN as a correspondent for L3 Media interviewing popular celebrities within the urban culture such as Cynthia Bailey of the Real Housewives of Atlanta, David Banner, Traci Braxton, and actor Hosea Chanchez. Candace assisted L3 Media in launching an official cable show, L3 Television and a style show that covers local fashion designers and contributors entitled, “Style Center” that currently airs weekly in Memphis. Candace has relocated to Los Angeles, currently taking advanced hosting classes with Marki Costello, hosting with BlacktreeTv, and pursuing her dreams fully of being a television host, radio host, internationally published model, and humanitarian.

I should also point out that in early reports about the show, when it was thought to be a VH1 project called Flora-Bama, it was stated that all of the cast members are Donald Trump supporters, except for one woman. I will let you guess who that probably is. 😉

OK, here are all of the cast members with their ages, hometowns, brief bio from MTV, an occasional silly preview clip, and LOTS of hot Instagram photos:

With Clark Kent good looks and a Superman physique, it’s no wonder Kortni and Nilsa break into their happy dance when Jeremiah walks through the door. But when he brings a new girl home, all hell breaks loose, igniting an all out battle between the guys and the girls. Smart, confident and opinionated, Jeremiah is here to tell you that home-schooled does not equal socially awkward.

Codi is a true southern gentleman who is more than a little ready to leave his bartending job at “an old people’s bar” back in South Carolina, for a wild summer in Panama City Beach. But with all that experience listening to other people’s problems, Codi is quick to insert himself in the other roommates’ conflicts. Both caretaker and pot stirrer, Codi is a straight up good old southern soul who, at the end of the day, has the power to bring the house together.

Kortni is a Panama City Beach local who can’t wait to show her new roommates how to party in HER town. But the roommates are about to learn that people don’t call her Krazy Kortni for nothing. She’s never lived away from home, never had to take care of herself, and never had a job she didn’t get fired from. Kortni is going to bring the party for sure…if she makes it past night one.

Dress for the job you want ?? #FloribamaShore @aimeeelizabethhall

Aimee comes to Panama City Beach from Perdido, Alabama, ready to leave the past behind. On and off with the same guy for 10 years, she finally had to draw the line when he got another girl pregnant. But nothing can dim the spark of this self-described Princess Goddess Mermaid. NOT afraid to say what’s on her mind, she keeps the whole house in line with her down home wisdom mixed with a little potty mouth.

MEET NILSA @nillythesquid! ? Also, can it be Nov 27 yet???? #FloribamaShore

Kirk is a Panama City Beach local by way of Atlanta, and with his wild beach hair and a smile that lights up a room, he’s fully embracing the beach lifestyle. Kirk values family above all else, and this summer, on more than one occasion, he finds himself defending his new “family” in a bar brawl. He’s particularly close to Gus, with whom he shares a similar past.

Gus is a southern charmer who prides himself on being respectful to everyone, especially women. So it’s particularly devastating to him when he gets caught up in the battle between the guys and the girls. Kicked out of his house when he was 17, Gus had to grow up fast and is ready to party it up this summer. But don’t get him wrong. What Gus wants more than anything is to find the right woman and wife up. And soon.