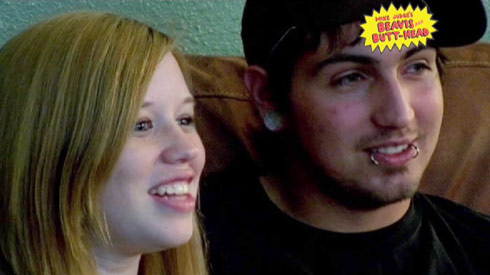 Mike Judge’s popular animated series Beavis and Butt-head returned to MTV this season after a 14-year hiatus and the grunting young adult adolescents had little problem making the adjustment as they began offering up their unique brand of ignorant and insightful commentary on the pop culture landscape of 2011.

Caught most often in B&B’s cross hairs (likely due to licensing issues) are the reality shows on their own network including Jersey Shore, True Life, and Farrah Abraham’s breast implants episode of Teen Mom. In the second episode of the season Beavis and Butt-head went after 16 and Pregnant – more specifically, Megan McConnell and her baby daddy Nathan Stone.

Here is the complete episode “Daughter’s Hand” – the 16 and Pregnant clip starts right around the 1:30 mark:

Butt-head: This chick is a horrible actor.
Beavis: Yeah, really.
Butt-head: Uh, wait a minute. I think this is real.
Beavis: Oh yeah, yeah, So um, so she’s not a bad actor then, yeah, just a bad person.

Beavis: What’s that on his hat?
Butt-head: That’s his name so he won’t get lost.

Butt-head: This would be a better show if they, like, showed ’em actually getting pregnant. Yeah, it’d be called I’m 16 and Tonight I’m gonna Get Pregnant.”

I confess I couldn’t help chuckling when they showed Nathan looking pensively out the window and Butt-head says, “See, he’s looking for a job.” And Beavis follows up with, “Gotta be one out there somewhere.” 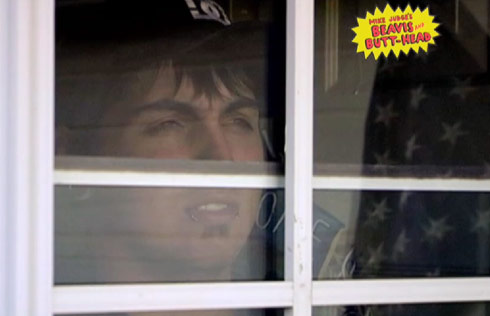 And Beavis and Butt-head will be returning to the 16 and Pregnant well on this week’s episode when they go after Aubrey Wolters Akerill, the infamous party gal from Season 2b who went drinking and kissed a girl during the “Where Are They Now?” special. Here’s a poorly recorded version of the commercial for the episode, which is titled “Time Machine” and will air Thursday night at 10/9c:

I only hope they include the scene in which Aubrey’s unemployed baby daddy (and future ex-husband) Brandon comes up with the brilliant idea to spend a bunch of money on equipment to go panning for gold!

On a conspiracy-theory-fueled side note, does anyone else find it suspicious that the two girls chosen to be mocked are the two that have spoken out negatively about MTV? Aubrey Akerill has made a number of comments about how MTV manipulated filming and editing to make her look worse and Megan McConnell went as far as to write a lengthy post about her negative feelings toward the network, claiming they had her lie during the voice-overs and manipulated scenes to distort the truth. I’m just sayin!