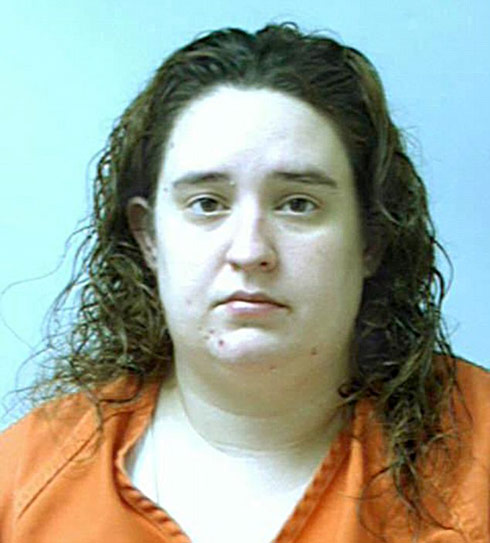 The mug shot photo above is of 32-year-old Amy Slanina from Pennsylvania who reportedly fakes being pregnant to lure people, including hopeful adoptive couples, into giving her attention and gifts. Even more shocking than her alleged unscrupulous activities is the fact that they aren’t the reason for the mug shot above because they aren’t against the law!

Slanina is currently in jail in Kittanning, Pennsylvania after being arrested in December for lying about being the abused spouse of a police officer so she could stay in a battered women’s shelter. While at the shelter she contacted Barry Vest, 36, and Rebecca Vest, 31, of Idaho through their profile on an adoption web site.

The Vests are unable to conceive on their own and have had two birth mothers back out of privately arranged adoptions since adopting their son Owen as a newborn five years ago. The couple thought themselves savvy about the process, but were blindsided by Slanina, who never asked for money and seemed to know exactly what to say, according to Rebecca.

Here is a local report from the Vest’s hometown of Rigby, Idaho:

Slanina told the couple her name was Aimee and said she was due on January 17. Shortly after the Vests had arranged for their caseworker to meet Slanina she texted them to say she had gone into labor on December 29. The Vests bought airplane tickets and rented a car to meet Slanina at the hospital, but after labor updates from the baby’s father (actually from Slanina of course) stopped the Vests were told by a nurse at the hospital, “I’m sorry, we’re not having any births here or any adoption births.”

At that point Rebecca Vest broke down.

Later the Vests would find out that Slanina was in jail and that the thousands of dollars they had spent were for nothing.

From The Daily Mail:

Since the Vests spent $2,500 rushing to Pennsylvania, Slanina was charged with a section of Pennsylvania’s disorderly conduct law – the only statute police could find that might fit her actions. Public defender Chuck Pascal got a district judge to dismiss that charge, though he doesn’t dispute Slanina’s actions.

Slanina has a different public defender on the women’s shelter charges who didn’t return repeated calls attempting to get a message to her.

Slanina is 5-foot-4 and 175 pounds and according to those who have met her, she can easily pass for someone six or seven months pregnant. And that’s exactly what she has done on numerous occasions, not just to lure in prospective adoptive parents, but also to secure housing and affection from friends and lovers.

Though faking her pregnancy is not a crime, Slanina has been convicted on two different occasions for identity theft and grand theft auto while lying about being pregnant.

Here is her mug shot photo from a 2010 arrest in Ohio for forgery, theft, misuse of credit cards, and receipt of stolen property: 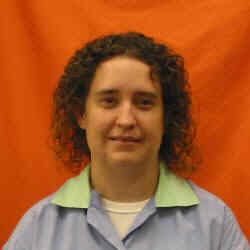 Amazingly, Amy Slanina was featured on a 2006 episode of Dateline after she scammed two separate sets of prospective parents using the name Christy Tidwell. (Dateline would later incorrectly reveal that her actual name was Amy Ost Cumbee.) Here’s a video clip in which Amy confronts one of the couples she deceived, Lori and Chris Coleman – click here for the lengthy, full report from Dateline.

The Vests realize that since Slanina never received anything from them directly that she will not be prosecuted for what she did to them, but they are hopeful that she will receive a lengthy sentence for her most recent arrest given her lengthy criminal history of fraud.

“What did you get from this?” Rebecca Vest said of Slanina. “Since you have a history of this, why can’t you change? Why can’t you get a job like everybody else? Why do you make a living off of causing other people pain? Are you that miserable that you have to make other people miserable?”