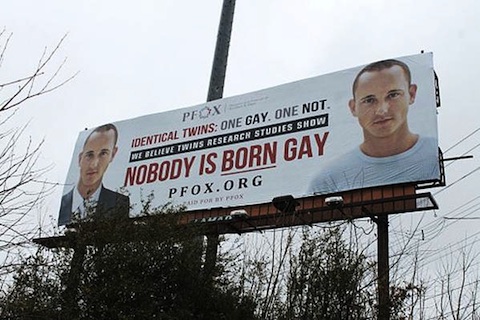 A billboard along I-95 outside Richmond VA is stirring up controversy like there’s a stew goin’. Parents and Friends of Ex-Gays (PFOX) has erected an advertisement featuring alleged twin men, one of whom is allegedly a homosexual–and the slogan between them reads “Nobody is Born Gay.”

Regina Griggs, Executive Director of PFOX, backed up her billboard claim in a statement:

We find it interesting that the attacks against the billboard and ex-gay community have nothing to do with the facts. Identical twins have the same genes or DNA. They are nurtured in equal prenatal conditions.  If homosexuality is caused by genetics or prenatal conditions and one twin is gay, the co-twin should also be gay…Because identical twins are always genetically identical, homosexuality cannot be genetically dictated. No one is born gay.

But Beth Panilaitis, executive director at ROSMY, an LGBTQ-friendly organization based in Richmond, was dismayed by what she deemed a hateful message. “I am shocked and really disappointed,” said Panilaitis, “that at the end of 2014, we have a billboard in the middle of our city that says that kind of hate….No young person or adult should be walking down the road and see something that says that they are not okay as they are.”

And Bill Harrison, a member of the organization Richmond Gay Community, pointed out the real-life implications of such a message, saying “We do not know why people are heterosexual. Maybe when we figure that out, we can determine why some people are not. What we do know is that this type of therapy has caused many people to commit suicide.”

Meanwhile, on the other side of the world, the model whose picture was used to represent twins on the billboard spoke out against PFOX’s misrepresentation.

Kyle Roux is both South African and openly gay, and said “It just seems like there no place in today’s world for an organization that is promoting this as being some kind of deviant or distasteful lifestyle, because I’ve lived my life openly gay and happy for my entire life.”

According to Roux, the photo PFOX used is roughly a decade old. When Roux posed for it, he was told it would likely be used in “commercial and corporate ads.”

When asked how her organization managed to wrangle the acronym PFOX out of the phrase “Parents and Friends of Ex-Gays”–especially when PFEX would be a more accurate abbreviation and PFOX evokes the sex-laden phrase “foxy”–Griggs declined to comment.