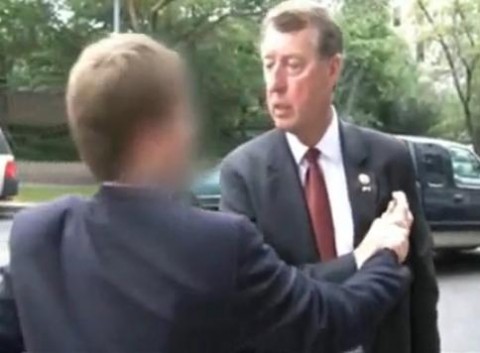 Congessman Bob Etheridge needs anger management courses and we have the video to prove it.  An amateur video shot in Washington D.C. by two unnamed “students” shows Etheridge losing his mind after being asked if he supports President Obama’s agenda.  Following this question Etheridge repeatedly asks, “Who are you?” and grabs one of the young men in question first by the wrist and then by the neck. Talk about “abuse of power!”

That is some serious congressional creepiness right there!  Since this video has been circulated the Democratic Representative from North Carolina has apologized.  Here is what ol’ Bob had to say about his candid-camera moment:

“I have seen the video posted on several blogs,” Etheridge said in a statement. “I deeply and profoundly regret my reaction and I apologize to all involved. Throughout my many years of service to the people of North Carolina, I have always tried to treat people from all viewpoints with respect. No matter how intrusive and partisan our politics can become, this does not justify a poor response. I have and I will always work to promote a civil public discourse.”

Poor Bob is bound to pick up a nickname after all this, so here are some of my suggestions:

How to win an election in Alabama

Donald Trump won’t be in Washington for Biden’s Inauguration