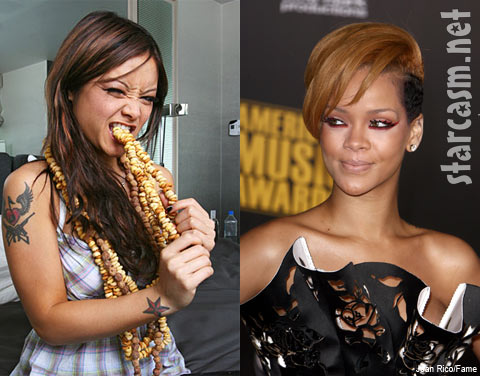 Tila Tequila retaliates against insults in top 13-year-old form. Burned from a public diss from Rihanna (via Google Alerts, no less, Hi Tila!), Tila responds that Rihanna has an STD: herpes. How does she know this? “Supposed sources” in Rihanna’s legal camp. You can read her whole blog tirade by clicking here. It’s classy.

So what did Rihanna say to get Tila so riled up? Rihanna was on a radio show called “Big Boi’s Neighorhood” and Big Boi asked her who she would “turn off” if she could. At first she blurted out Wyclef Jean, then thought about Tiffany Evans (who called Rihanna’s “Russian Roulette” satanic) for a minute before settling on Tila Tequila big time! Read what she said and watch the video below:

Now, the question is why Rihanna was so ready to turn off Tequila? The day after Tila Tequila’s naked, crazy UStream Rant where she accused rattle off accusations at Shawne Merriman while wearing nothing but some blingy costume jewelry, Tila Spoke to TMZ about how she was pretty much better than Rihanna by speaking to every single media outlet she could about the alledged abuse she suffered at Shawne’s hand. That’s right, the day after Tila Tequila stripped and rambled on UStream, she accused Rihanna of sending the wrong message to women for waiting a few months after her abuse from Chris Brown to talk. Here’s what Tila said:

“No offense to Rihanna, but because of what she did, it sends out a message to everyone . . . ‘When you get beat or abused, keep your mouth shut.’ So I decided I am going to come out and speak about it and fight for it. . . her message was to stay quiet and that’s not OK.”

Chris Brown doesn’t mess with ‘that’ girl, Natalie Nunn, is too busy obsessing over Rihanna — and Michael Jackson