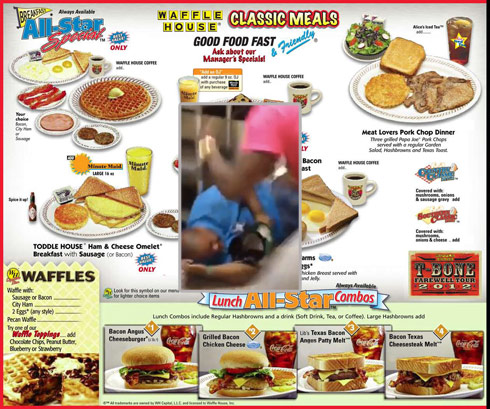 If you grew up in the south like I did just about everyone has some sort of “fight at Waffle House” tale to tell. They’re usually memorable but I doubt many would have the lingering effect that the following clip will.

According to WSHH where the following snippet was posted, this battle went down in Atlanta and occurred after a lone man insulted some peeps. At one point he can be heard calling them fa**ots and that’s when all Waffle-hell broke loose and the group proceeded to scramble his eggs.

I got no info yet on the participants or who the dude was that caught the bad end of this toast. He learned the hard way that if you don’t have something nice to say you dang sure better not blab at the Dub-House or it will be all over easy. Just sit quietly with your head down and eat that All Star Special.

Victoria Wilcher, 3-year-old mauled by dogs, asked to leave KFC because her face was ‘scary’