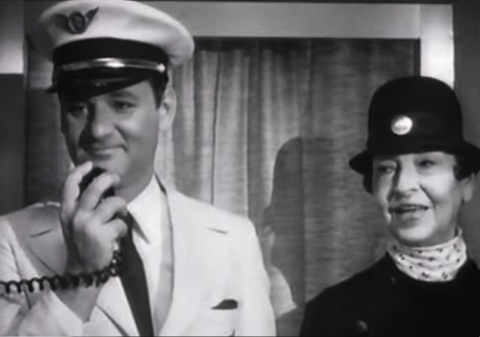 A still from Nothing Lasts Forever.

Nothing Lasts Forever, a never-before-released 1984 science fiction comedy featuring Bill Murray as a conductor of a bus to the moon, is available in full on YouTube for your viewing pleasure.

The film stars Zach Galligan of Gremlins fame as a young artist dealing with life in a Port Authority-controlled, authoritarian New York. He flees the city and takes Murray’s bus to find his true love, with hilarious results.

Though not a lengthy motion picture, Nothing Lasts Forever was nonetheless deemed too confusing and / or strange by studio execs, and shelved indefinitely.

And, as Slate reports, copyright issues might be another reason the film never saw release:

…clips from a variety of older movies are integrated into scenes, as if it were a sort of early YouTube mashup. Copyright issues have long stalled or flat-out prohibited some releases from obtaining wider distribution.

The movie was written by Tom Schiller, an alum of the Saturday Night Live writers room. In his 2005 memoir, Schiller wrote that he never received a straightforward answer about why the movie was kept under wraps.

But now some sly devil has leaked it to YouTube. So get to your nearest dark room, go full screen, and enjoy eighty minutes of outer space zaniness complete with America’s Grandpa before the powers that be have the link taken down.