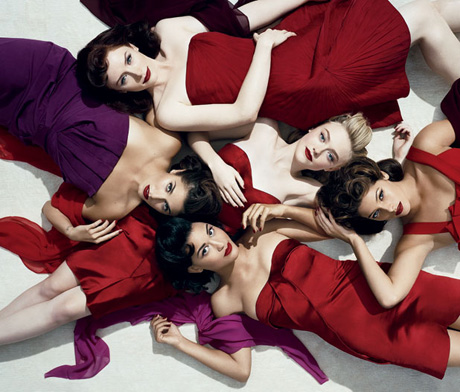 The July issue of Vanity Fair will include a vamped up photo shoot featuring a sexy six pack of young actresses from The Twilight Saga: Esclipse, due to take over theaters June 30. Representing Team Edward on the blood-sucking side of things are Count Dractresses Dakota Fanning, Nikki Reed, Ashley Greene, Elizabeth Reaser, and Bryce Dallas Howard while Team Jacob is represented by a lone werewolf, Julia Jones.

Here’s a sneak peek video of the shoot including interviews with Dakota Fanning, Ashley Greene, Julia Jones and Bryce Dallas Howard (in that order):

Vampire mom Elizabeth Reaser offers her own, slightly more mature take on working with the young and sexy Twihunks:

“Oh, it gets so old, you have no idea,” says Reaser. “It has no effect on me. They’re all gorgeous and lovely boys. … You just want someone interesting and weird at a certain point. I have a massive crush on Larry David.”

Curious about the song used in the Vanity Fair “Girls of Twilight” video shoot? The performer’s name is Fyfe Dangerfield and the song is called “She Needs Me.” Of course I tracked down the video for you!