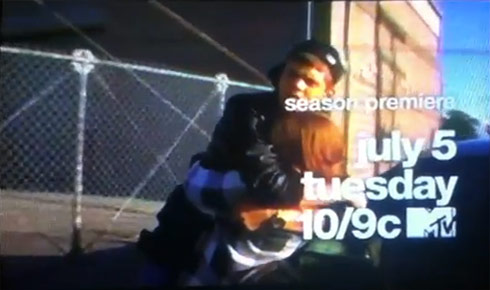 Our Teen Mom Season 3 commercial collection is almost complete! Here is the preview focused entirely on Catelynn Lowell and Tyler Baltierra which means all we have left to find is Maci!

As usual, the video is of pretty bad quality, but I have to confess that at this point I’m kinda diggin’ the lo-fi. It reminds of when I used to buy bootleg CDs (yeah, I’m that old) in that there’s a sense of adventure and subversiveness when watching (or hearing) something you’re not supposed to. I saw this Catelynn commercial last night during 16 and Pregnant and it was oddly disappointing. Where’s the sense of discovery in that?!? Anyways, here’s the bootlegged version that some teenager in Missouri probably risked her life to record and share with you!

Catelynn and Tyler’s storyline appears to continue on much the same as it has since their episode of 16 and Pregnant, which can be summed up with these three themes:

1. Dealing with giving up their daughter Carly for adoption

2. Rising above their terrible home situation

The thing about Catelynn and Tyler is that they are so genuine and earnest that these three themes are more than compelling enough to keep viewers (like myself) interested.

In the commercial they talk about getting their own place and I sincerely hope they are able to! I still think they should have convinced Carly’s adopted parents Brandon and Theresa to adopt them as well! Theoretically it would have only been for a couple years until they graduated high school, right? (Which they have done by the way! CLICK HERE for more about that accomplishment.)

I’ll keep an eye out for the Maci commercial, but until then be sure to check out all the other Teen Mom Season 3 previews including the non-bootlegged official two-minute trailer from MTV!