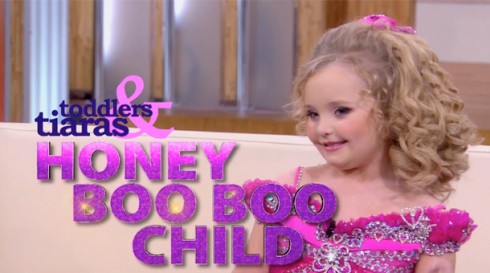 We missed this when it was first reported two weeks ago, but we just saw that Perez Hilton’s children blog Perezitos says Honey Boo Boo Child (a.k.a. Alana Thompson) has her own reality spin-off. This puts a bigger spin on “dolla make me holla.”

From the footage we saw on Toddler’s & Tiaras, Alana doesn’t win a lot of pageants because, despite her endless imbibement of “Go-go Juice (Mountain Dew and Red Bull)” she doesn’t let her personality shine on stage the way she lets it shine in from of a reality television confessional camera.

We’re sure lots of people are going to be highly critical of this idea, to be honest, we can’t get enough of Alana, and neither can the internet. All the old talk show episodes we have saved on the DVR feature Boo-Boo Child appearances. Her mom June is also an extreme couponer, so there’s an added element to Honey Boo Boo’s potential new show. I think we’d watch, would you?

Here’s a clip from Alana’s introduction to the world via TLC’s Toddlers & Tiaras: